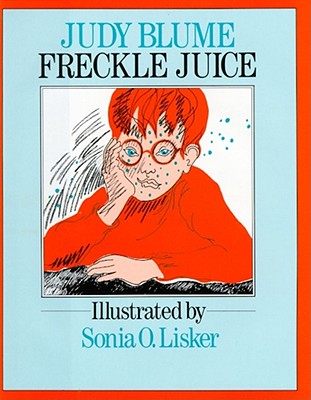 More than anything in the world, Andrew wants freckles. His classmate Nicky has freckles -- they cover his face, his ears, and the whole back of his neck. (Once sitting behind him in class, Andrew counted eighty-six of them, and that was just a start One day after school, Andrew screws up enough courage to ask Nicky where he got his freckles. And, as luck would have it, who should overhear him but giggling, teasing Sharon (who makes frog faces at everybody ) Sharon offers Andrew her secret freckle juice recipe -- for fifty cents. That's a lot of money to Andrew -- five whole weeks allowance He spends a sleepless night, torn between his desire for freckles and his reluctance to part with such a substantial sum of money. Finally, the freckles win, and Andrew decides to accept Sharon's offer. After school, Andrew rushes home (with the recipe tucked into his shoe for safekeeping). He carefully begins to mix the strange combination of ingredients -- and immediately runs into some unforeseen problems. How Andrew finally manages to achieve a temporary set of freckles -- and then isn't sure he really wants them -- makes a warm and hilarious story.