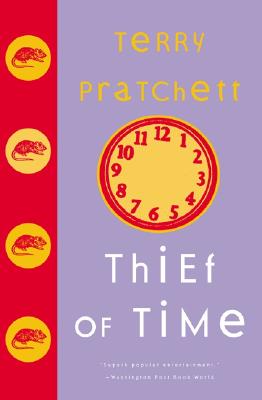 It was only a matter of time before Terry Pratchett would win the minds and hearts of America. Already a worldwide sensation and Great Britain's indisputable number one author, this intellectually audacious and effortlessly hilarious writer sold more hardcover books in the United Kingdom during the previous decade than any other living novelist. His novels have reigned supreme on English bestseller lists since before the Iron Lady left Downing Street, and though some things have changed since then, Pratchett, thankfully, continues to pen insightfully irreverent tales set in a world a lot like our own -- only different.

Celebrated as one of the keenest practitioners of satire and parody at work today -- alongside Kurt Vonnegut, Douglas Adams, and Carl Hiaasen -- Terry Pratchett commands a loyal and ever-increasing number of readers and appreciative critics from coast to coast in our own country. As he skewers all aspects of modern life -- and especially our sacred cows -- Pratchett makes us laugh and challenges us to think. And he's at his sharpest, most uproarious best in Thief of Time.

Everybody wants more time, which is why on Discworld its management is entrusted to the experts: the venerable Monks of History, who store it and pump it from where it's wasted, like underwater (after all, how much time does a codfish really need?) to places like cities, where harried citizens are forever lamenting, "Oh where does the time go?"

And while everyone always talks about slowing down, one clever soul is about to stop. Stop time, that is. For good. Going against everything known (and the nine tenths of everything that remains unknown), a young horologist has been commissioned to build the world's first truly accurate clock. It falls to History Monk Lu-Tze and his apprentice Lobsang Ludd to find the timepiece and stop it before it starts. For if the Perfect Clock starts ticking, Time -- as we know it -- will stop. And then the trouble will really begin.

A superb send-up of science and philosophy, religion and death (after all, isn't that where time stops, for most of us, anyway?), and a host of other timely topics, Thief of Time provides the perfect opportunity to kick back and unwind. So don't put off till tomorrow what you could do today. Read Thief of Time. Right this minute. Because tomorrow may not come. (You'll have to read the book to find out why. This is a Terry Pratchett novel, after all.)