The Match: Two Outsiders Forged a Friendship and Made Sports History (Paperback) 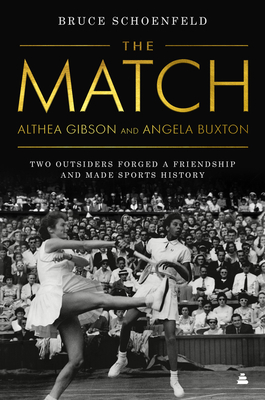 By Bruce Schoenfeld
$19.99
On Our Shelves Now

The incredible story of what happened when two outsiders—one an emerging champion who happens to be Jewish, the other, the first black player to win Wimbledon—pair up not only to form a winning team, but also an enduring friendship.

Althea Gibson first met Angela Buxton at an exhibition match in India. On the surface, the two women couldn’t be more different. The daughter of sharecroppers and fiercely competitive, Althea Gibson was born in the American South and turned to athletics in an effort to belong to a community that would welcome her. Angela Buxton, the granddaughter of Russian Jews, grew up in Liverpool. England, where her father ran a successful business. But they both faced their share of prejudice, particularly on the tennis circuit, where they were excluded from tournaments and clubs because of race and religion.

At the 1956 Wimbledon, despite their athletic prowess, both were shunned by the other female players and found themselves without doubles partners. Undaunted, they decided to play together. And though they had never so much as practiced together—they triumphed. In Nobody’s Darlings, Bruce Schoenfeld delivers an unexpected story of two underdogs who refused to let bigotry stop them both on the court and off. Here too is the story of a remarkable friendship.

Bruce Schoenfeld, an acclaimed magazine and television journalist, is a frequent contributor to many national and international publications, including Sports Illustrated, Travel & Leisure, and the New York Times Magazine. He won Emmy Awards for his writing on the 1988 Olympic Games in Seoul and the 1996 Olympic Games in Barcelona. He is the author of The Last Serious Thing: A Season at the Bullfights.

“Terrific....An important contribution in spreading the legacy of Gibson, a woman worth remembering.”
— Publishers Weekly

“A reminder of the best and worst in sports.”
— Robert Lipsyte

“Heartwarming....Both the book and the women are to be valued and respected.”
— Lesley Visser, CBS Sportscaster

“Schoenfeld captures the not-so-good-old days of...tennis that are virtually forgotten in these affluent times.”
— Bud Collins

“Skillful....Schoenfeld blends the passion of an enraptured fan with the measured eye of a seasoned journalist.”
— Kirkus Reviews on The Last Serious Thing

“Althea Gibson…belongs to the ‘what ever happened to’ school of athletes…this book…answer[s] with verve and style.”
— Library Journal

“A remarkable tale of a friendship.”
— Jon Entine, author of Taboo: Why Black Athletes Dominate Sports and Why We're Afraid to Talk About It

“Schoenfeld is a true sportswriter--able to bring to life the sweat and intensity of Gibson’s matches.”
— The Crisis

“A detailed look at an era, a friendship and a sport.”
— Chicago Tribune