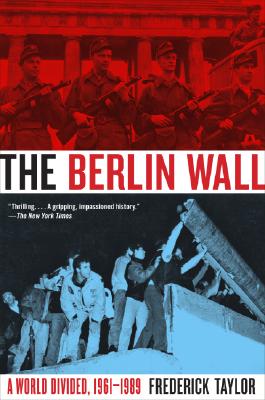 By Frederick Taylor
$15.99
Email or call for price.

“This vivid account of the Wall and all that it meant reminds us that symbolism can be double-edged, as a potent emblem of isolation and repression became, in its destruction, an even more powerful totem of freedom.” — The Atlantic Monthly

On the morning of August 13, 1961, the residents of East Berlin found themselves cut off from family, friends, and jobs in the West by a tangle of barbed wire that ruthlessly split a city of four million in two. Within days the barbed-wire entanglement would undergo an extraordinary metamorphosis: it became an imposing 103-mile-long wall guarded by three hundred watchtowers. A physical manifestation of the struggle between Soviet Communism and American capitalism that stood for nearly thirty years, the Berlin Wall was the high-risk fault line between East and West on which rested the fate of all humanity.

In the definitive history on the subject, Frederick Taylor weaves together official history, archival materials, and personal accounts to tell the complete story of the Wall's rise and fall.

Frederick Taylor studied history and modern languages at Oxford University and Sussex University. A Volkswagen Studentship award enabled him to research and travel widely in both parts of divided Germany at the height of the Cold War. Taylor is the author of Dresden and has edited and translated a number of works from German, including The Goebbels Diaries, 1939-1941. He is married with three children and lives in Cornwall, England.

“The story of this ‘foetid flourishin’’ is convincingly told. . . . For those who wish to understand the rise of the Wall, this book is valuable.”
— The Independent

“A thorough attempt to preserve the historical record before the moths of fading of or false memory devour it . . . an intelligent and well-researched account. His most commendable achievement is to have resuscitated those who died because of the Wall.”
— The Daily Telegraph

Frederick Taylor . . . follows up his outstanding Dresden with The Berlin Wall, and manages once again to combine serious historical research with an assured, gripping narrative. . . . Taylor’s extraordinary narrative skill [has] the pacing of a thriller and the immediacy of reportage.
— The Irish Times

“A superb narrative. . . . Taylor’s enthralling story, combined with impeccable research and its rich human interest, makes this as dramatically gripping as any of the spy thrillers that used the wall as a backdrop.”
— Publishers Weekly (starred review)

“As Taylor eloquently illustrates, the wall served the purposes of both the Eastern bloc and the major Western powers. . . . Taylor provides a fascinating and often heartbreaking account of both the human costs and the geopolitical effects.”
— Booklist

“Using personal accounts of those who lived through the brutal division of Berlin in 1961, he intricately weaves stories to form a superb, gripping narrative.”
— The Bookseller

“This vivid account of the Wall and all that it meant reminds us that symbolism can be double-edged, as a potent emblem of isolation and repression became, in its destruction, an even more powerful totem of freedom.”
— Atlantic Monthly

“There’s a serious, edifying experience to be had in reading Frederick Taylor’s comprehensive history of the Berlin Wall.”
— Janet Maslin, CBS Sunday Morning