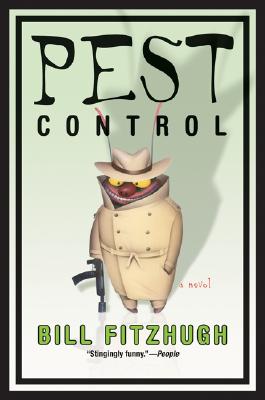 By Bill Fitzhugh
$13.95
Backordered. Place an order and we will let you know when to expect your book.

Bob Dillon can't get a break. A down-on-his-luck exterminator, all he wants is his own truck with a big fiberglass bug on top -- and success with his radical new, environmentally friendly pest-killing technique. So Bob decides to advertise.

Unfortunately, one of his flyers falls into the wrong hands. Marcel, a shady Frenchman, needs an assassin to handle a million-dollar hit, and he figures that Bob Dillon is his man. Through no fault -- or participation -- of his own, this unwitting pest controller from Queens has become a major player in the dangerous world of contract murder.

And now Bob's running for his life through the wormiest sections of the Big Apple -- one step ahead of a Bolivian executioner, a homicidal transvestite dwarf, meatheaded CIA agents, cabbies packing serious heat ... and the world's number-one hit man, who might just turn out to be the best friend Bob's got.

“PEST CONTROL is an eccentrically comic take on the high-tech thriller...[it is a] strange and funny...curiously appealing little novel of intrigue”
-National Public Radio - All Things Considered

“A very funny and interesting book...give it to someone who needs a good laugh.”
-San Antonio Express-News

“...a clever and satisfying debut...offbeat, engaging, and very funny reading, it is wholly successful.”
-Washington Post

“...this is one roach motel you’ll gladly check into.”
-Time Out New York