Genome: The Autobiography of a Species in 23 Chapters (Paperback) 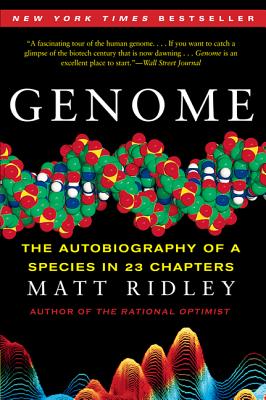 “Ridley leaps from chromosome to chromosome in a handy summation of our ever increasing understanding of the roles that genes play in disease, behavior, sexual differences, and even intelligence. . . . . He addresses not only the ethical quandaries faced by contemporary scientists but the reductionist danger in equating inheritability with inevitability.” — The New Yorker

The genome's been mapped. But what does it mean? Matt Ridley’s Genome is the book that explains it all: what it is, how it works, and what it portends for the future

Arguably the most significant scientific discovery of the new century, the mapping of the twenty-three pairs of chromosomes that make up the human genome raises almost as many questions as it answers. Questions that will profoundly impact the way we think about disease, about longevity, and about free will. Questions that will affect the rest of your life.

Genome offers extraordinary insight into the ramifications of this incredible breakthrough. By picking one newly discovered gene from each pair of chromosomes and telling its story, Matt Ridley recounts the history of our species and its ancestors from the dawn of life to the brink of future medicine. From Huntington's disease to cancer, from the applications of gene therapy to the horrors of eugenics, Ridley probes the scientific, philosophical, and moral issues arising as a result of the mapping of the genome. It will help you understand what this scientific milestone means for you, for your children, and for humankind.

Matt Ridley is the author of books that have sold well over a million copies in 32 languages: THE RED QUEEN, THE ORIGINS OF VIRTUE, GENOME, NATURE VIA NURTURE, FRANCIS CRICK, THE RATIONAL OPTIMIST, THE EVOLUTION OF EVERYTHING, and HOW INNOVATION WORKS. In his bestseller GENOME and in his biography of Francis Crick, he showed an ability to translate the details of genomic discoveries into understandable and exciting stories. During the current pandemic, he has written essays for the Wall Street Journal and The Spectator about the origin and genomics of the virus. His most recent WSJ piece appeared on January 16, 2021. He is a member of the House of Lords in the UK.

“A fascinating tour of the human genome…If you want to catch a glimpse of the biotech century that is now dawning…GENOME is an excellent place to start.” — Wall Street Journal

“A superb writer whose exquisite, often moving descriptions of life’s designs remind me of the best work of the late Lewis Thomas. . . . He crafts some of the clearest explanations of complex biological processes that I have encountered. . . . He captures their slippery beauty.” — Washington Post Book World

“A tour de force: clear, witty, timely, and informed by an intelligence that sees new knowledge as a blessing and not a curse.” — London Times

“A jargon-free excursion of intellectual discovery that will carry any reader along its tour of exciting, often delightful, stories structured to help us understand in everyday terms, and to remember, the revelations about genetic evolution that have come to light in the last few decades. It also makes us see the enormous social and political consequences of that knowledge.” — New York Times Book Review

“Ridley is a lucid, engaging and enthusiastic guide to the double-helical DNA that comprises our inheritable human essence.” — Los Angeles Times Book Review

“An extraordinarily nimble synthesist, Ridley leaps from chromosome to chromosome in a handy summation of our ever increasing understanding of the roles that genes play in disease, behavior, sexual differences, and even intelligence. . . . . He addresses not only the ethical quandaries faced by contemporary scientists but the reductionist danger in equating inheritability with inevitability.” — The New Yorker

“Ridley can explain with equal verve difficult moral issues, philosophical quandaries and technical biochemistry; he distinguishes facts from opinions well, and he’s not shy about offering either. Among many recent books on genes, behavior and evolution, Ridley’s is one of the most informative. It’s also the most fun to read.” — Publishers Weekly (starred review)

“An engrossing account of the genetic history of our species. . . . This book will be particularly relevant to lay readers, providing insight into how far we have come and where we are heading in the understanding of our genetic heritage. — Library Journal

“A lucid and exhilarating romp through our 23 human chromosomes that lets us see how nature and nature combine to make us human.” — James Watson

“With riveting anecdotes, clever analogies and compelling writing, Matt Ridley makes the human genome come alive for us. I was left in awe at the wonder of the human body, and the scientists who unravel its mysteries.” — Abraham Verghese, author of The Tennis Partner

“Matt Ridley [writes] with a combination of biblical awe, scientific curiosity and wit about what many consider the greatest scientific breakthrough of the 20th century and the greatest technological challenge of the 21st: the discovery of the molecular basis of life and its many applications in medicine, law, and commerce.” — Dallas Morning News