American Pie: Slices of Life (and Pie) from America's Back Roads (Paperback) 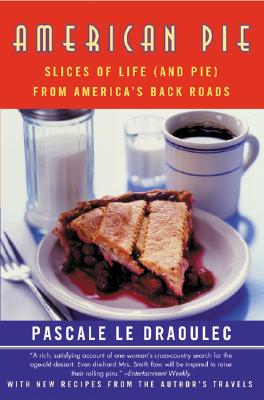 “A rich, satisfying account of one woman’s cross-country search for the age-old dessert.” — Entertainment Weekly

An engaging and quirky travelogue, cultural and personal excursion, and adventure-cookbook that brings back from the highways and back roads a homemade slice of America

Crossing class and color lines, and spanning the nation (Montana has its huckleberry, Pennsylvania its shoofly, and Mississippi its sweet potato), pie—real, homemade pie—has meaning for all of us. But in today's treadmill, take-out world—our fast-food nation—does pie still have a place?

As she traveled across the United States in an old Volvo named Betty, Pascale Le Draoulec discovered how merely mentioning homemade pie to strangers made faces soften, shoulders relax, and memories come wafting back. Rambling from town to town with Le Draoulec, you'll meet the famous, and sometimes infamous, pie makers who share their stories and recipes, and find out how a quest for pie can lead to something else entirely.

Pascale Le Draoulec is the restaurant critic for the New York Daily News. Her stories ran over the Gannett wire service and in USA Today among other magazines and newspapers. She lives in New York City. This is her first book.

“[American Pie] will move pie enthusiasts to dust off their rolling pins and get busy.” — Chicago Tribune

“American Pie is to be savored, slice by slice, chapter by chapter.” — San Diego Union-Tribune

“A rich, satisfying account of one woman’s cross-country search for the age-old dessert.” — Entertainment Weekly

“Le Draoulec has an instinct for where the most interesting story might lie...as this book charmingly demonstrates.” — Washington Post Book World

“Le Draoulec explores America’s relationship with pie with a journalist’s instinct and curiosity.” — Lisa Ko, author of The Leavers