The Giant's House: A Romance (Paperback) 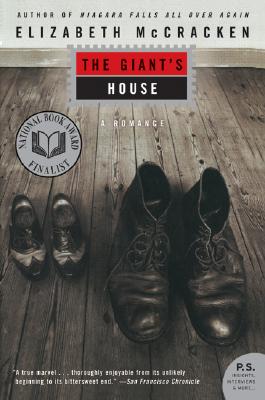 By Elizabeth McCracken
Unavailable. Orders will be auto-cancelled.

The year is 1950, and in a small town on Cape Cod twenty-six-year-old librarian Peggy Cort feels like love and life have stood her up. Until the day James Carlson Sweatt -- the "over-tall" eleven-year-old boy who's the talk of the town -- walks into her library and changes her life. Two misfits whose lonely paths cross at the circulation desk, Peggy and James are odd candidates for friendship, but nevertheless they find their lives intertwined in ways that neither one could have predicted. And as James grows -- six foot five at age twelve, then seven foot, then eight -- so does Peggy's heart and their most singular romance.

Elizabeth McCracken is the author of five books, Here’s Your Hat What’s Your Hurry (stories), The Giant’s House (a National Book Award finalist), Niagara Falls All Over Again, the memoir An Exact Replica of a Figment of My Imagination, and Thunderstruck & Other Stories (winner of the 2014 Story Prize, long-listed for the National Book Award), three of which were New York Times Notable Books. She has received grants and fellowships from the Guggenheim Foundation and the National Endowment for the Arts. She has served on the faculty at the Iowa Writers’ Workshop and currently holds the James Michener Chair for Fiction at the University of Texas at Austin.