She-Wolves: The Women Who Ruled England Before Elizabeth (Paperback) 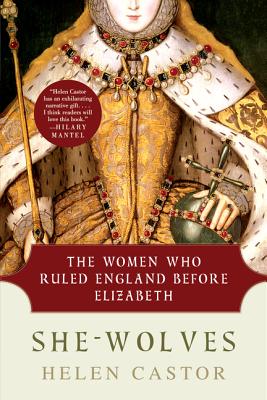 In the tradition of Antonia Fraser, David Starkey, and Alison Weir, prize-winning historian Helen Castor delivers a compelling, eye-opening examination of women and power in England, witnessed through the lives of six women who exercised power against all odds—and one who never got the chance. Exploring the narratives of the Empress Matilda, Eleanor of Aquitaine, Isabella of France, Margaret of Anjou, and other “she-wolves,” as well as that of the Nine Days' Queen, Lady Jane Grey, Castor invokes a magisterial discussion of how much—and how little—has changed through the centuries.

Helen Castor is a historian of medieval England and a Bye-Fellow of Sidney Sussex College, Cambridge. Her first book, Blood and Roses, was long-listed for the Samuel Johnson Prize and won the English Association’s Beatrice White Prize. Her second book, She-Wolves, was selected as one of the books of the year by The Guardian, The Sunday Times, The Independent, Financial Times, and BBC History Magazine. She lives in London.

“A gripping book . . . She-Wolves is a superb history of the powerful women who have surrounded England’s throne, combining blood-drenched drama, politics, sex and swordplay with scholarly analysis, symptahy for the plight of women and elegant writing.”
— Simon Sebag Montefiore, Daily Telegraph (London)

“Beautifully narrated . . . learned and exciting. This is medieval history at its best.”
— Evening Standard

“Castor skillfully combines this analysis with driving narratives, using vivd details from contemporary chronicles to bring those distant days alive. She-Wolves makes one gasp at the brutality of medieval power struggles—and at the strength and vitality of the women who sought to wield royal power.”
— Jenny Uglow, Financial Times

“Castor has done a masterful job of outlining the burdens these women faced. . . . Readers of popular history of British royals will enjoy their immensely human stories.”
— Library Journal