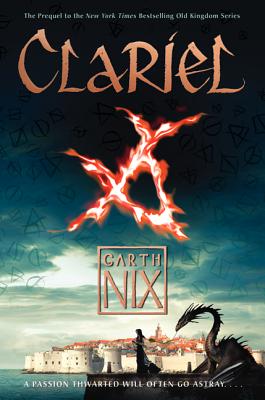 This is book number 4 in the Old Kingdom series.

"I was both excited and apprehensive about reading Clariel, the newest installment of the Old Kingdom series by Garth Nix. Bound by her ties to an ancient bloodline, sixteen-year-old Clariel has been uprooted and thrust into a world where she’s sure she does not belong, and you will never guess where that certainty leads her. It’s a prequel, taking place about 200 or so years before Sabriel, and as a longtime fan of the first three books, I was nervous about the ten year gap between the publication of the original series and this. I can tell you now, I was wrong to be wary. Clariel is a young adult novel with adult complexity and a twist ending so good I shouted out loud when I read it. This was everything I didn’t know I wanted from an Old Kingdom book, full of history and world-building, plotting and politics. Truly stunning."

"To be honest, I read this one last summer, but Garth Nix’s magic on me is old…and powerful. He casts spells in my gut. Clariel is the continuation/prequel in Nix’s Old Kingdom Chronicles. Set in an Old Kingdom 600 years before the events of the original Abhorsen trilogy, Clariel unfolds a new Old Kindgom before us, one that looks vastly different from the Old Kingdom beleaguered by the Dead which we know–one that is beaming with a vibrant and powerful merchant middle class, where the Dead do not trespass on the living and haven’t for years. Clariel’s one desire is to become a Ranger and live out her life in the forest–alone. But as the daughter of nobility (and relative of the Abhorsens) her family have other plans for her. Clariel is clever but naive, independent but trusting, strong but emotional–in short, she is us."

I grew up with these stories (the first, Sabriel, turned 20 years old this year!), and I have always suspected that Nix had more Old Kingdom stories locked away in his head (which I imagine looks like the library of the Clayr from the second book Lirael). With this book, my suspicions have been rewarded that the Old Kingdom as a complex and nuanced history–one which many participants (not just the Abhorsens) shape. And Nix has plenty to say about unquestioning loyalty and the inherent nature of things.

Award-winning author Garth Nix returns to the Old Kingdom with a thrilling prequel complete with dark magic, royalty, dangerous action, a strong heroine, and flawless world building. This epic fantasy adventure is destined to be a classic and is perfect for fans of Rae Carson, Kristin Cashore, Scott Westerfeld, and Cassandra Clare.

Clariel is the daughter of one of the most notable families in the Old Kingdom, with blood relations to the Abhorsen and, most important, to the King. She dreams of living a simple life but discovers this is hard to achieve when a dangerous Free Magic creature is loose in the city, her parents want to marry her off to a killer, and there is a plot brewing against the old and withdrawn King Orrikan. When Clariel is drawn into the efforts to find and capture the creature, she finds hidden sorcery within herself, yet it is magic that carries great dangers. Can she rise above the temptation of power, escape the unwanted marriage, and save the King?

“Between striking characters-from the heroic if not entirely competent young Abhorsen-in-Waiting, Belatiel, to the enigmatic, catlike Mogget-and Nix’s brilliantly complex magic system, this superb tale is exactly the book fans of the series have been awaiting.” — Publishers Weekly (starred review)

“Clariel is a deeply sympathetic character faced with complicated choices, the consequences of which are frighteningly uncertain as she is pulled between the wild Free Magic and the disciplined Charter. A bittersweet story.” — Booklist (starred review)

“Nix pens a compelling character in Clariel while his skill in rendering both politics and magic is strong. This excellent work can be enjoyed independently of the other Old Kingdom novels, but will certainly draw readers to those works.” — School Library Journal (starred review)

“Nix’s tale provides a complete experience unto itself. But his focus on this strong character whose overriding passion is to go her own way provides a hugely satisfying background to the other Abhorsen books. A suspenseful prequel to the much-loved Abhorsen books, showcasing the independent Clariel.” — Shelf Awareness (starred review)

“The old magic returns in this sterling prequel to one of YA’s classic series.” — Scott Westerfeld, New York Times bestselling author of the Uglies series and Afterworlds

“A brilliant return to the Old Kingdom--one of the most exciting and original magical worlds ever devised.” — Alison Goodman, New York Times bestselling author of Eon and Eona

“A thunderstorm of a tale, bitter and brutal but dazzling in its ferocity.” — Kirkus Reviews

“Fans will treasure this long-awaited opportunity to return to a much-loved world, built with as much originality and richness as ever.” — Horn Book Magazine

“Nix fans will surely rejoice at this sharp, gripping prequel to his beloved fantasy trilogy of Sabriel, Lirael and Abhorsen. The beauty of a prequel is that it will not only present unknown scenarios even to the most intense devotees but also pave a path for new fans to dive into the existing trilogy. “ — Bulletin of the Center for Children’s Books

Praise for SABRIEL: “Sabriel is a winner, a fantasy that reads like realism. Here is a world with the same solidity and four dimensional authority as our own, created with invention, clarity, and intelligence. I congratulate Garth Nix. And I look forward to reading his next piece of work.” — Philip Pullman

Praise for LIRAEL: “What makes Lirael a delight is the magic that Nix brings to his story and to his characters.” — Publishers Weekly (starred review)