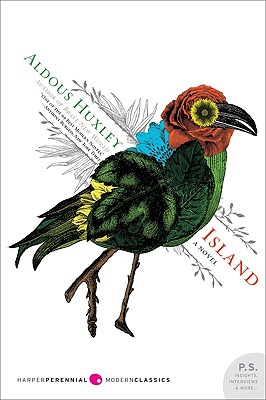 "If anthropologists study unknown cloistered societies to find unexpected
enlightenment or perfection, Aldous Huxley mapped the fantasy of such a
world for them. One of his later works, Island houses much more
appreciation for moment-by-moment experience, still with a healthy dose
of political irony. It’s the greatest classic nobody told you about."

The final novel from Aldous Huxley, Island is a provocative counterpoint to his worldwide classic Brave New World, in which a flourishing, ideal society located on a remote Pacific island attracts the envy of the outside world.

Aldous Huxley (1894–1963) is the author of the classic novels Brave New World, Island, Eyeless in Gaza, and The Genius and the Goddess, as well as such critically acclaimed nonfiction works as The Perennial Philosophy and The Doors of Perception. Born in Surrey, England, and educated at Oxford, he died in Los Angeles, California.

“A mirror for modern man. . . . Should be read and reread.”
— Saturday Review