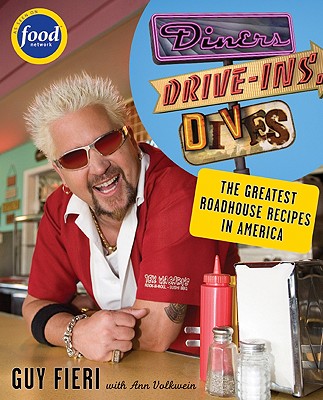 Food Network star Guy Fieri takes you on a tour of America's most colorful diners, drive-ins, and dives in this tie-in to his enormously popular television show, complete with recipes, photos, and memorabilia.

Packed with Guy's iconic personality, Diners, Drive-ins and Dives follows his hot-rod trips around the country, mapping out the best places most of us have never heard of. From digging in at legendary burger joint the Squeeze Inn in Sacramento, California, baking Peanut Pie from Virginia Diner in Wakefield, Virginia, or kicking back with Pete's "Rubbed and Almost Fried" Turkey Sandwich from Panini Pete's in Fairhope, Alabama, Guy showcases the amazing personalities, fascinating stories, and outrageously good food offered by these American treasures.

Ann Volkwein is a food and lifestyle writer based in New York City and Austin, Texas, who also collaborated with Guy on his four previous books.

“Rounded out with plenty of behind-the-scenes anecdotes and local color, this tour of off-the-beaten-path establishments has enough regional entries to keep culinary road-trippers busy (and full) for many, many miles. ” — Publishers Weekly