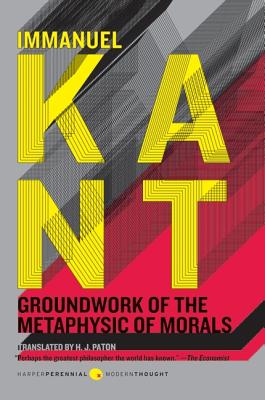 Considered one of the most profound, influential, and important works of world philosophy, Groundwork of the Metaphysic of Morals introduces his famous Categorical Imperative and lays down a foundation for all of Immanuel Kant's writings. In it, Kant illuminates the basic concept that is central to his moral philosophy and, in fact, to the entire field of modern ethical thought: the Categorical Imperative, the supreme principle of morality, stating that all decisions should be made based on what is universally acceptable. Featuring the renowned translation and commentary of Oxford's H. J. Paton, this volume has long been considered the definitive English edition of Kant's classic text. "Kant's Groundwork of the Metaphysic of Morals," Paton writes in his preface, "is one of the small books which is truly great: it has exercised on human thought an influence almost ludicrously disproportionate to its size."

Immanuel Kant (1724-1804) was born in Königsberg, Prussia, where he remained his entire life. His others works include Critique of Pure Reason and Religion Within the Limits of Reason Alone.