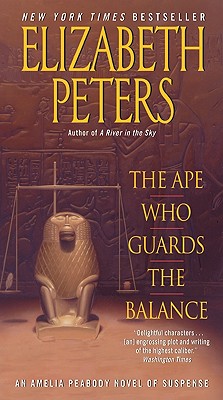 This is book number 10 in the Amelia Peabody Series series.

“Delightful….[An] engrossing plot and writing of the highest caliber.”

A globe-trotting archeologist with more grit, wit, and fortitude than Indian Jones himself, the intrepid Amelia Peabody confronts danger and dark mystery in the desert sands of Egypt in The Ape Who Guards the Balance—a breathtaking adventure from New York Times bestselling Grandmaster Elizabeth Peters that encompasses treachery, villainy, bloodthirsty cults, the Book of the Dead…and murder most foul. The Charleston Post and Courier proclaims Elizabeth Peters “a mistress of plot,” while the New York Times Book Review declares, “Amelia remains an irrepressible delight.”