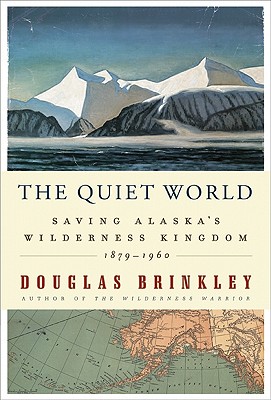 In this fascinating follow-up to his New York Times bestseller Wilderness Warrior, acclaimed historian Douglas Brinkley offers a riveting, expansive look at the past and present battle to preserve Alaska’s wilderness. Brinkley explores the colorful diversity of Alaska’s wildlife, arrays the forces that have wreaked havoc on its primeval arctic refuge—from Klondike Gold Rush prospectors to environmental disasters like the Exxon-Valdez oil spill—and documents environmental heroes from Theodore Roosevelt to Dwight Eisenhower and beyond. Not merely a record of Alaska’s past, Quiet World is a compelling call-to-arms for sustainability, conservationism, and conscientious environmental stewardship—a warning that the land once called Seward’s Folly may go down in history as America’s Greatest Mistake.

“Douglas Brinkley has written a sweeping, blow-by-blow account of the struggle to preserve the last great remnants of American wilderness. An engaging appraisal of the crucial skirmishes in the battle over wild Alaska, The Quiet World is populated not only by the requisite luminaries like John Muir and Ansel Adams, but also by a cast of quirky, unexpected characters. The Quiet World is a fascinating and important read.”
— Jon Krakauer

“A poignant cautionary tale for policymakers considering quick get-rich fixes to long-term problems with ecological implications. . . . In Brinkley’s hands, the still-raging battle to save Alaska’s wild character is riveting.”
— The Christian Science Monitor

“Engrossing. . . . The Quiet World brims over with information and insight, passion and insistence. . . . A bit like Alaska itself: large, formidable, raw and ultimately unforgettable.”
— The Washington Post

“Brinkley carves well-known figures with the tools of a skilled biographer. . . . This volume is required reading for anyone even mildly interested in the antecedents to U.S. environmental policy in the 21st century.”
— The Los Angeles Times

“An important book.”
— The Houston Chronicle

“A very readable history of the preservationist movement across the nation.”
— The Seattle Times

“The Quiet World succeeds as a steadily paced and well-researched history. But what happily makes this sprawling story so readable is how the Rice University scholar lovingly spins a tale of how ‘a noble band of conservationist revolutionaries’ saved Alaska-from its exploiters and for the rest of us. . . .The Quiet World brims with vivid characters.”
— The Cleveland Plain Dealer