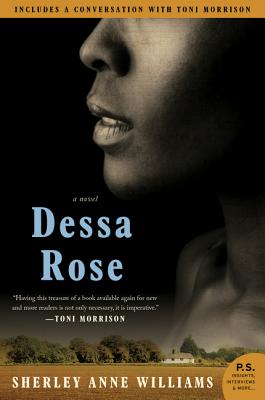 Sherley A. Williams’ highly acclaimed historical novel details two women’s fierce strength of will and an unlikely bond despite racial barriers in the pre-civil war south.

In 1829, in Kentucky, a pregnant black woman helped lead an uprising of a group of slaves headed to the market for sale. She was sentenced to death, but her hanging was delayed until after the birth of her baby. In North Carolina in 1830, a white woman living on an isolated farm was reported to have given sanctuary to runaway slaves. In Dessa Rose, Sherley A. Williams asks the question: “What if these two women met?”

From there the story unfolds: two strong women, one black, one white, form a forbidden and ambivalent alliance; a bold scheme is hatched to win freedom; trust is slowly extended and cautiously accepted as the two women unite and discover greater strength together than alone. United by fate but divided by prejudice, these two women are locked in a thrilling battle for freedom, sisterhood, friendship, and love.

“Having this treasure of a book available again for new and more readers is not only necessary, it is imperative.” —Toni Morrison

Sherley Anne Williams (1944-1999) was a novelist, literary critic, an award-winning poet, and the author of short stories and several works for children. Williams's first collection of poetry, The Peacock Poems, was nominated for the Pulitzer Prize and the National Book Award. Her first work for children, Working Cotton, was a Caldecott Honor recipient. Williams was a longtime professor of literature at the University of California, San Diego.

“A deep, rich, compelling work. . . . I am astonished, moved, and delighted with the language, the thought, the obvious collaboration of the ancestors and the love I read on these pages.”
— Alice Walker

“Extraordinary. . . . These two women achieve one of the most intricate and ambivalent relationships in contemporary fiction.”
— Los Angeles Times

“Having this treasure of a book available again for new and more readers is not only necessary, it is imperative.”
— Toni Morrison