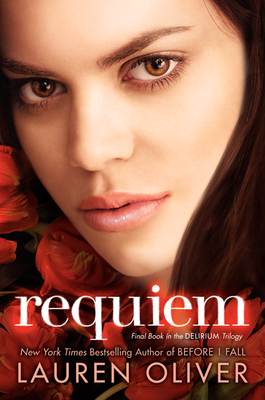 This is book number 3 in the Delirium Trilogy series.

“In the final book of the Delirium trilogy Lena is in an impossible place -- and it only gets worse. Oliver uses the points of view of Lena and her best friend, Hana, to give the reader perspective inside and beyond the wall, making the tale all the more interesting when their stories converge. Alex's indifference pains Lena but she must stay strong for Julian who is quickly falling in love with her. As much as she tries to deny it, her heart will always belong to Alex -- if only he would realize that. Oliver ties up all the loose ends in this thrilling conclusion.”
— Alexis Duell, Market Block Books, Troy, NY

The third and final book in Lauren Oliver’s powerful New York Times bestselling trilogy about forbidden love, revolution, and the power to choose.

Now an active member of the resistance, Lena has transformed. The nascent rebellion has ignited into an all-out revolution, and Lena is at the center of the fight.

After rescuing Julian from a death sentence, Lena and her friends fled to the Wilds. But the Wilds are no longer a safe haven. Pockets of rebellion have opened throughout the country, and the government cannot deny the existence of Invalids. Regulators infiltrate the borderlands to stamp out the rebels.

As Lena navigates the increasingly dangerous terrain of the Wilds, her best friend, Hana, lives a safe, loveless life in Portland as the fiancée of the young mayor. They live side by side in a world that divides them until, at last, their stories converge.

“Before starting, readers should turn off their cellphones and wipe their schedules clean, because once they open the book, they won’t be able to stop. A dystopian tour de force.” — Kirkus Reviews (starred review)

Praise for PANDEMONIUM: “From the grief-stricken shell of her former self to a nascent refugee and finally to a full-fledged resistance fighter, Lena’s strength and the complexity of her internal struggles will keep readers up at night.” — Kirkus Reviews (starred review)

Praise for PANDEMONIUM: “This is a romance in the purest of senses, where just the longing for the faintest taste of love is worth the greatest of risks. Like all successful second volumes, this expands the world and ups the stakes, setting us up for the big finale.” — Booklist

Praise for PANDEMONIUM: “If...you crave the heart-stopping action of the arena from The Hunger Games combined with a destined-to-be-doomed love story then this sequel is perfect for you!” — Seventeen.com

Praise for PANDEMONIUM: “Following directly on the heels of Delirium, Pandemonium is equally riveting. The underlying theme that love will win out regardless of prohibition is a powerful idea that will speak to teens.” — School Library Journal

Praise for Delirium: “Strong characters, a vivid portrait of the lives of teens in a repressive society, and nagging questions that can be applied to our world today make this book especially compelling and discussable.” — School Library Journal (starred review)

Praise for Before I Fall: “Oliver’s debut novel is raw, emotional, and, at times, beautiful....readers will love Samantha best as she hurtles toward an end as brave as it is heartbreaking.” — Publishers Weekly (starred review)

Praise for Before I Fall: “Samantha’s attempts to save her life and right the wrongs she has caused are precisely what will draw readers into this complex story and keep them turning pages until Sam succeeds in living her last day the right way.” — Voice of Youth Advocates (VOYA) (starred review)