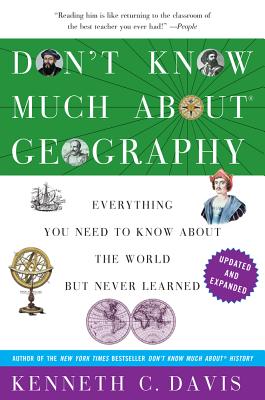 Don't Know Much About Geography by New York Times bestselling author Kenneth C. Davis is a fascinating and fun exploration of our planet.

In addition to presenting geographical trivia that’ll impress your friends, Davis explores 21st-century topics of global concern, including the role of the Internet and technology in transforming the lives of people around the world, how so-called developing nations develop, sustainability, and the debates over climate change and evolutionary science.

This completely revised and updated version of Don't Know Much About Geography is an entertaining and illuminating grand tour of planet Earth.

Kenneth C. Davis is the New York Times bestselling author of A Nation Rising; America's Hidden History; and Don't Know Much About® History, which spent thirty-five consecutive weeks on the New York Times bestseller list, sold more than 1.7 million copies, and gave rise to his phenomenal Don't Know Much About® series for adults and children. A resident of New York City and Dorset, Vermont, Davis frequently appears on national television and radio and has been a commentator on NPR's All Things Considered. He blogs regularly at www.dontknowmuch.com.