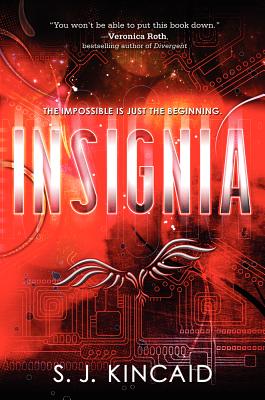 This is book number 1 in the Insignia series.

“At 14, Tom Raines is recruited by the Pentagon to train to fight in World War III, a war that is being fought in space by ships controlled by teenagers. While training, Tom learns that the line between enemy and friend is often blurred. With exhilarating battles, some great pranks, and a group of teenagers who are trying to survive military high school, Insignia will keep you riveted from the first page.”
— Rebecca Olson, Saturn Booksellers, Gaylord, MI

"Insignia expertly combines humor with a disarming and highly realistic view of the future. The characters are real, funny, and memorable. You won't be able to put this book down."—Veronica Roth, #1 New York Times bestselling author of Divergent and Insurgent

The earth is in the middle of WWIII in Insignia, the first entry in S. J. Kincaid's fast-paced sci-fi adventure trilogy perfect for fans of Ender's Game.

The planet's natural resources are almost gone, and war is being fought to control the assets of the solar system. The enemy is winning. The salvation may be Tom Raines. Tom doesn't seem like a hero. He's a short fourteen-year-old with bad skin. But he has the virtual-reality gaming skills that make him a phenom behind the controls of the battle drones.

As a new member of the Intrasolar Forces, Tom's life completely changes. Suddenly, he's someone important. He has new opportunities, friends, and a shot at having a girlfriend. But there's a price to pay. . . .

S. J. Kincaid was born in Alabama, grew up in California, and attended high school in New Hampshire. She also interned for a politician in Washington, DC, and received degrees from universities in Illinois and Ohio, but it was while living beside a haunted graveyard in Edinburgh, Scotland, that she realized she wanted to be a writer. Several years, several manuscripts, and several jobs later, Ms. Kincaid now lives in California, and Catalyst is the conclusion to the Insignia trilogy.

PRAISE FOR INSIGNIA “Insignia expertly combines humor with a disarming and highly realistic view of the future. The characters are real, funny, and memorable. You won’t be able to put this book down.” — Veronica Roth, #1 New York Times bestselling author of DIVERGENT and INSURGENT

“Hip, high-tech, and hilarious, INSIGNIA made my heart soar and left me with impossible-to-shake questions about technology, reality, and war.”—Rae Carson, author of THE GIRL OF FIRE AND THORNS — Rae Carson

“An unlikely teen is selected to attend Hogwarts-at-the-Pentagon. With action, real humor and a likable, complex protagonist, this fast-moving, satisfying adventure also provides some food for thought.” — Kirkus Reviews