Dreams and Shadows: A Novel (Paperback) 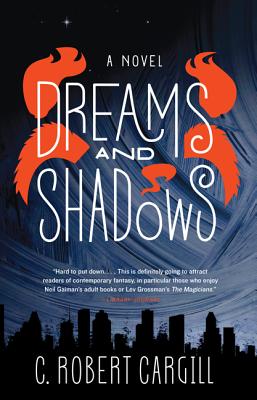 I picked up Dreams and Shadows because an urban fantasy novel
set in Austin and the Hill Country intrigued me. Wow – I was amazed and
entirely enraptured from the beginning to the end, for Cargill, a
screenwriter creates a world where magic mixes with the mundane and
offers consequences that are entirely believable. It is important to note that Cargill utilizes many aspects of the Fae
world and sets them in familiar settings: nixies living in Town Lake,
redcaps prowling the Greenbelt, fallen angels patronizing dingy bars off
6th street. I mean who hasn’t seen strange things in the lakes, woods,
and bars in this capital city? Cargill focuses his characters’ struggles
in settings that everyone is free to enjoy but enhances them with a
hell of a great tale. If you enjoy urban fantasty, or any kind of dark fantasy, Dreams and Shadows is for you.

Screenwriter and acclaimed film critic C. Robert Cargill makes his fiction debut with Dreams and Shadows, taking beloved fantasy tropes, giving them a twist, and turning out a wonderful, witty, and wry take on clash between the fairy world and our own.

Something is missing from Ewan and Colby’s lives. Residing in the corners of their memories is their time in Limestone Kingdom, a realm filled with magic and mystery, a world where only some may travel amongst the menagerie of mystical souls and sinister demons.

Cargill offers well-crafted characters and an absorbing, intricate plot that will appeal to fans of Neil Gaiman and Lev Grossman. Dreams and Shadows pulls you into an extraordinary universe of darkness that exposes the magic and monsters in our world, and in ourselves.

C. Robert Cargill is the author of Dreams and Shadows and Queen of the Dark Things. He has written for Ain’t it Cool News for nearly a decade under the pseudonym Massawyrm, served as a staff writer for Film.com and Hollywood.com, and appeared as the animated character Carlyle on Spill.com. He is a cowriter of the horror films Sinister and Sinister 2, and Marvel’s Dr. Strange. He lives with his wife in Austin, Texas.

“A potent introduction to a world where the wondrous is rarely wonderful, the best intentions are guaranteed to roam farthest astray, and the reader is destined to keep turning the pages until the (somewhat) bitter end.” — BookPage

“Dark, comedic, and unsettling, Dreams and Shadows is everything an urban fantasy sets out to be.” — Tor.com

“Cargill proves with Dreams and Shadows that he’s not just a writer capable of creating and presenting dense mythology well...but that he is also a talented storyteller with a visual sense about his prose that edges on riveting.” — Breitbart/ Big Hollywood

“The rich language, world building, and moral questions posed make for fascinating reading. Much of the novel is dark, but hope and redemption form the bedrock of the complex characters.” — SFRevu

“Exceptional worldbuilding, sure-handed plotting and well-rounded characters, even the nasty ones, abound, and the whole impressive enterprise moves smartly along through a fairy culture with a structure and motivations sharply different from that of humans. A mesmerizing and highly original debut.” — Kirkus Reviews (starred review)

“In this beautifully written debut.... The universe is richly detailed, and issues of destiny and sacrifice give the story depth…for those that enjoy a rollercoaster ride into the depths of strangeness and despair.” — Publishers Weekly (starred review)