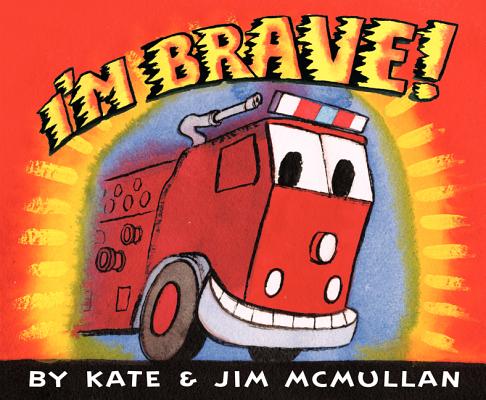 For fans of Goodnight, Goodnight, Construction Site and Steam Train, Dream Train comes the perfect noisy addition to this hilarious read-aloud series from the popular creators of I Stink!, and I'm Dirty!—now a streaming animated series!

I'm Brave! is the most irresistible addition yet to Kate and Jim McMullan's hilarious read-aloud series: a fire truck.

He's a big red engine
With a siren,
A horn,
A tank full of water,
And a whole lotta hose!

He's a good-lookin' fire truck,
And he's brave, too.
When the alarm sounds
Eeeeeeeeeeeeeeeoooooooooo
He's gotta drive through
Smoke and heat
Straight to a blazing fire!

Kate McMullan is the author of the easy-to-read books featuring Fluffy, the Classroom Guinea Pig, the middle grade series Dragon Slayers’ Academy, and Myth-o-Mania, the Greek myths as told by Hades. She is also the author of the Geisel Honor Book Pearl and Wagner: One Funny Day.

Jim McMullan is an internationally acclaimed illustrator and poster designer whose work can be seen in The Theater Posters of James McMullan. His most recent book is the illustrated memoir Leaving China: An Artist Paints His World War II Childhood.

“This boisterous story pays homage to the importance of fire fighters-and their engines-while maintaining plenty of action and a sense of fun.”
— School Library Journal

“For those kids who dream of the station, the fire pole and the calls, this will be an exciting ride.”
— Kirkus Reviews

Praise for I’M BAD!: “Vibrant artwork done in bold shades of green, orange, and violet equal the swaggering text in tone, energy, and humor. Whether devoured during a boisterous storytime or consumed independently, children will eat this one up.”
— School Library Journal (starred review)

Praise for I’M DIRTY!: “Full of kid appeal, this is sure to be a favorite with reluctant readers, those who revel in mud and all who love trucks.”
— Kirkus Reviews (starred review)

Praise for I STINK!: “It will easily become a favorite of younger readers”
— The New York Times Book Review

Praise for I STINK!: “A hilarious homage to an unsung hero.”
— Publishers Weekly (starred review)