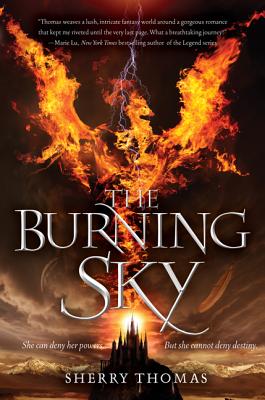 This is book number 1 in the Elemental Trilogy series.

Magic, romance, and intrigue combine in this extraordinary novel—the first in the Elemental Trilogy—for fans of Cinda Williams Chima and Kristin Cashore. Publishers Weekly called it "a wonderfully satisfying magical saga" in a starred review, and Kirkus Reviews said it "bids fair to be the next big epic fantasy success."

Iolanthe Seabourne is the greatest elemental mage of her generation—or so she's been told. The one prophesied for years to be the savior of the Realm. It is her duty and destiny to face and defeat the Bane, the most powerful tyrant and mage the world has ever known. This would be a suicide task for anyone, let alone a reluctant sixteen-year-old girl with no training.

Guided by his mother's visions and committed to avenging his family, Prince Titus has sworn to protect Iolanthe even as he prepares her for their battle with the Bane. But he makes the terrifying mistake of falling in love with the girl who should have been only a means to an end. Now, with the servants of the tyrant closing in, Titus must choose between his mission—and her life.

Sherry Thomas is the author of The Burning Sky and The Perilous Sea, the first two books in the Elemental Trilogy. Sherry immigrated to the United States from China when she was thirteen and taught herself English in part by devouring science fiction and romance novels. She is the author of several acclaimed romance novels and is the recipient of two RITA Awards. Sherry lives with her family in Austin, Texas.

“Thomas weaves a lush, intricate fantasy world around a gorgeous romance that kept me riveted until the very last page. What a breathtaking journey!” — Marie Lu, New York Times bestselling author of the Legend series

“As expected, Thomas’s romantic touch is sure, but she is just as adept with fantasy world-building, carrying the banners of Anne McCaffrey and Caroline Stevermer, among others, in a wonderfully satisfying magical saga.” — Publishers Weekly (starred review)

“Bids fair to be the next big epic fantasy success. Teens and adults in the target audience will devour it.” — Kirkus Reviews

“The Burning Sky combines one of the most creative magical systems since Harry Potter, with sizzling romance and characters who will win your heart.” — Cinda Williams Chima, New York Times bestselling author of the Seven Realms series

“Sherry Thomas’s The Burning Sky is a marvelous, magical adventure set in a beautifully imagined world. I couldn’t turn the pages fast enough.” — Rae Carson, bestselling author of the Girl of Fire and Thorns series

“A rich, captivating world, full of intrigue, romance, and magic. The Burning Sky is truly unique and unlike anything else I’ve read!” — Sarah J. Maas, bestselling author of Throne of Glass

“Strong focus on characters and world building make this a fantasy saga to watch.” — Booklist