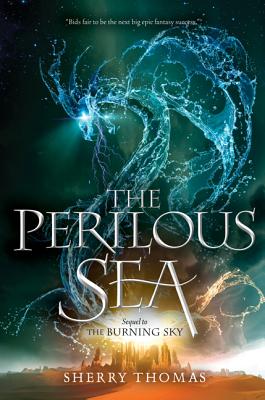 This is book number 2 in the Elemental Trilogy series.

Iolanthe and Titus continue their mission to defeat the Bane in this striking sequel to The Burning Sky—perfect for fans of Cinda Williams Chima and Kristin Cashore—which Publishers Weekly called "a wonderfully satisfying magical saga" in a starred review and Kirkus Reviews said "bids fair to be the next big epic fantasy success."

After spending the summer away from each other, Titus and Iolanthe (still disguised as Archer Fairfax) are eager to return to Eton College to resume their training to fight the Bane. Although no longer bound to Titus by blood oath, Iolanthe is more committed than ever to fulfilling her destiny—especially with the agents of Atlantis quickly closing in.

Soon after arriving at school, though, Titus makes a shocking discovery, one that throws into question everything he believed about their mission. Faced with this revelation, Iolanthe struggles to come to terms with her new role, while Titus must choose between following his mother's prophecies—or forging a divergent path to an unknowable future.

Sherry Thomas is the author of The Burning Sky and The Perilous Sea, the first two books in the Elemental Trilogy. Sherry immigrated to the United States from China when she was thirteen and taught herself English in part by devouring science fiction and romance novels. She is the author of several acclaimed romance novels and is the recipient of two RITA Awards. Sherry lives with her family in Austin, Texas.

“Will stoke anticipation for the next volume.”
— Kirkus Reviews

“Thomas mixes her coexisting worlds—Victorian England and a parallel magical Realm—with skill, and the romance bubbles with witty banter and elaborate declarations of love. It’s theatrical but satisfying.”
— Booklist

“A fantastic adventure filled with sneaky spies, all kinds of magic, and a whole bunch of unexpected surprises.”
— Voice of Youth Advocates (VOYA)