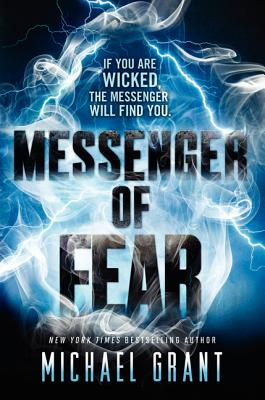 This is book number 1 in the Messenger of Fear series.

Michael Grant's Messenger of Fear is a haunting narrative that examines the nature of good and evil in every human. Fans of Michelle Hodkin's Mara Dyer trilogy and Stephen King will love this satisfyingly twisted series.

Mara Todd wakes in a field of dead grass, a heavy mist pressing down on her. She is terrified, afraid that she is dead. She can't remember who she is or anything about her past. Is it because of the boy who appears? He calls himself the Messenger of Fear. If the world does not bring justice to those who do evil, the Messenger will. He offers the wicked a game. If they win, they go free. If they lose, they will live their greatest fear. Either way, their sanity will be challenged.

It is a world of fair but harsh justice. Of retribution and redemption. And mystery. Why was Mara chosen to be the Messenger's apprentice? What has she done to deserve this terrible fate? She won't find out until three of the wicked receive justice. And when she does, she will be shattered.

“The Messenger of Fear has a two-word message for readers: BE AFRAID. The nightmares start in chapter one and don’t let up. Seriously, this book gave me chill after chill. My message to you: Read it in a safe, well-lighted place. It’s fright fiction at its best!” — R.L. Stine, Bestselling Author of the Goosebumps and Fear Street Series

“The enviably cunning and ever versatile Michael Grant explodes on the scene with Messenger of Fear, a palpitating horror fantasy mash-up with a genius twist that blew my mind. I walked through O’hare with this book in my face—I couldn’t stop reading!” — Lisa McMann, New York Times Bestselling Author of the Wake trilogy and The Unwanteds series

Grant only slowly unveils the reason Mara is with the Messenger, building tension and atmosphere expertly for maximum impact. Readers will find that in the end, it all comes together extremely well. An unusual and intriguing puzzle of a book. — Kirkus Reviews

“Grant’s new series starts off with a bang and never lets up.The games will delight those readers who enjoy a little gore and horror in their books. This is a promising start to a series with a truly unique concept.” — School Library Journal

“Written from a stream-of-consciousness point of view, this book is a welcome change from the current dystopian young adult books that are so popular.The idea that good and evil in the world are balanced on the edge of a knife is a motivating philosophy.” — Voice of Youth Advocates (VOYA)

“Grant explores bullying, family problems, suicide, and more, and several painful passages will have readers cringing, even as they make them think about what they would do in the same situation….a solid beginning to a series that is likely to be quite popular with horror and paranormal fans.” ” — Booklist

Praise for GONE: “If Stephen King had written LORD OF THE FLIES, it might have been a little like this.” — VOYA (starred review)

Praise for HUNGER: “Readers will be unable to avoid involuntary gasping, shuddering, or flinching while reading this suspense-filled story.” — VOYA (starred review)

Praise for LIES: “Disturbing, brilliantly plotted, and boasting a balanced mix of action and scheming.” — ALA Booklist

Praise for PLAGUE: “Grant’s science fantasy thrillers continue to be the very definition of a page-turner.” — ALA Booklist

Praise for LIGHT: “As a series finale, this book is more than satisfying-it is epic.” — VOYA (starred review)