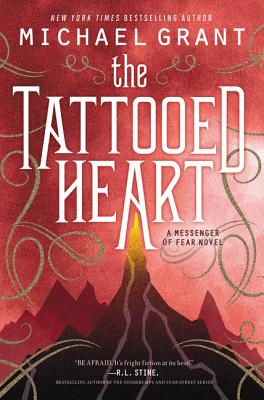 This is book number 2 in the Messenger of Fear series.

Mara has learned to punish the wicked as the Messenger's apprentice. Those who act out of selfishness and greed, and others who become violent because of prejudice and hate, pay the ultimate price. But Mara is constantly reminded that Messengers are serving their own kind of punishment—for every person who is offered justice, they wear a tattoo that symbolizes the heart of the crime. As Mara delves deeper into her harsh reality she will discover that in spite of all the terror she and Messenger inflict, caring in this world is the hardest part of all.

Praise for THE TATTOOED HEART: “An absorbing morality tale of guilt and redemption.” — Kirkus Reviews

“This will appeal to fans of the first installment as well as those who enjoy gory reads.” — School Library Journal

“Readers will still be satisfied with Mara’s growing maturity and acceptance of her own fate.” — Booklist

Praise for MESSENGER OF FEAR: “The Messenger of Fear has a two-word message for readers: BE AFRAID. The nightmares start in chapter one and don’t let up. Seriously, this book gave me chill after chill. My message to you: Read it in a safe, well-lighted place. It’s fright fiction at its best!” — R. L. Stine, author of the bestselling Goosebumps series

“The enviably cunning and ever versatile Michael Grant explodes on the scene with Messenger of Fear, a palpitating horror fantasy mash-up with a genius twist that blew my mind. I walked through O’hare with this book in my face-I couldn’t stop reading!” — Lisa McMann, New York Times Bestselling Author of the Wake trilogy and The Unwanteds series

“Grant only slowly unveils the reason Mara is with the Messenger, building tension and atmosphere expertly for maximum impact. Readers will find that in the end, it all comes together extremely well. An unusual and intriguing puzzle of a book.” — Kirkus Reviews

“Grant explores bullying, family problems, suicide, and more, and several painful passages will have readers cringing, even as they make them think about what they would do in the same situation….a solid beginning to a series that is likely to be quite popular with horror and paranormal fans.” — Booklist