Making Sense of the Bible: Rediscovering the Power of Scripture Today (Paperback) 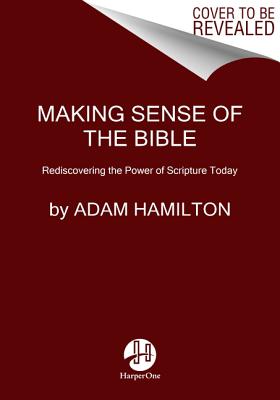 Denominations from evangelical to mainline continue to experience deep divisions over universal social issues. The underlying debate isn’t about a particular social issue, but instead it is about how we understand the nature of scripture and how we should interpret it. The world’s bestselling, most-read, and most-loved book is also one of the most confusing. In Making Sense of the Bible, Adam Hamilton, one of the country’s leading pastors and Christian authors, addresses the hot-button issues that plague the church and cultural debate, and answers many of the questions frequently asked by Christians and non-Christians alike.

Did God really command Moses to put gay people to death? Did Jesus really teach that everyone who is not a Christian will be assigned to hell? Why would Paul command women to “keep silent in the church?” Were Adam and Eve real people? Is the book of Revelation really about the end times? Who decided which books made it into the scriptures and why? Is the Bible ever wrong? In approachable and inviting language, Hamilton addresses these often misunderstood biblical themes leading readers to a deeper appreciation of the Bible so that we might hear God speak through it and find its words to be life-changing and life-giving.

Adam Hamilton is the founding pastor of the United Methodist Church of the Resurrection in Kansas City. Started in 1990 with four people, the church has grown to become the largest United Methodist Church in the United States with over 18,000 members. The church is well known for connecting with agnostics, skeptics, and spiritual seekers. In 2012, it was recognized as the most influential mainline church in America, and Hamilton was asked by the White House to deliver the sermon at the Obama inaugural prayer service. Hamilton, whose theological training includes an undergraduate degree from Oral Roberts University and a graduate degree from Southern Methodist University where he was honored for his work in social ethics, is the author of nineteen books. He has been married to his wife, LaVon, for thirty-one years and has two adult daughters.

“When I think about how many people have been turned off to the Christian faith because of how they mis-read and mis-understand the Bible, I can only say, ‘Thank you Jesus for this book!’ It’s going to help a lot of people.”
— Tony Campolo, Founder and President, Evangelical Association for the Promotion of Education

“Wondrously accessible, Hamilton combines good scholarship with a light touch and exhibits his wise, generous pastoral heart. Hamilton does not let us forget that he bears witness to the gospel and the result is a discussion that permits readers to think again and faithfully about the Bible.”
— Walter Brueggemann, Columbia Theological Seminary

“This is an honest, relevant, and captivating book. Hamilton asks taboo questions and refuses cliché answers. He invites you to join him on a quest for truth, and even if you don’t arrive at the same destination, you will sure enjoy the ride.”
— Shane Claiborne, author and activist

“Acting as friend and guide to those who seek to read the Bible intelligently and with spiritual insight, Hamilton walks readers through the pitfalls of fundamentalism and dry scholarship, opening up both the Bible’s profound humanity and its wisdom for living.”
— Diana Butler Bass, author of Christianity After Religion

“I can think of no one more adept at bringing out the beauty and authority of scripture while also shedding light on the Bible’s most controversial teachings than Adam Hamilton. This is a must read for anyone who is looking for a fuller understanding of the Bible.”
— Jim Wallis, president and founder of Sojourners and author of On God's Side

“If you hope there’s a better way to read, live by, and value the Bible, Hamilton has written the book that will help you-and people you know and love. It’s understandable. It’s honest. It’s wise. And it’s so, so needed.”
— Brian D. McLaren author of We Make the Road by Walking

This isn’t your grandfather’s revivalism. Equal parts an evangelical return to the Bible as the foundation of Protestant Christianity—and a scholarly, inclusive approach to understanding scripture that draws on themes familiar to readers of Brian D. McLaren, Rob Bell and Marcus Borg. Most importantly, for the millions of men and women who have been avoiding churches for years, this is a faithful and intelligent orientation to the Bible.
— Read the Spirit

“Helpful, pastoral, and hopeful....this book is a gift to the broader church at a time when we are not simply wrestling with so-called controversial issues, but perhaps discerning a fresh word from God on how to live as faithful Christ-followers in the twenty-first century.”
— The Covenant Companion

“The best single volume introduction to the bible.”
— The Quarterly Journal of the Academy of Parish Clergy