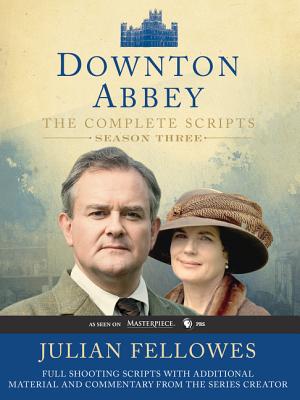 This is book number 3 in the Downton Abbey series.

Engross yourself in Julian Fellowes’ multi-award winning drama with the full script of Season Three, which includes previously unseen dialogue and drama as well as two 8-page color photo inserts.

Downton Abbey fever is stronger than ever!

The most successful British drama of our time continues to captivate viewers with its riveting storylines, stunning costumes, and unforgettable performances by its cast. With Downton Abbey’s script from Season Three—which was the most dramatic yet—fans can go behind-the-scenes to learn all of the secrets.

Offering readers the opportunity to read the work in more detail and study the characters, pace and themes in depth, the scripts include an introduction, exclusive commentary, full color photos, and additional material from Julian Fellowes. Readers will be given invaluable insight into how Fellowes researched and crafted the amazing world of Downton Abbey.

A must for lovers of Downtown Abbey, the scripts will enhance viewers’ experience with the award-winning show that continues to enchant its audience.

“Downton Abbey is what television should be.” — Daily Telegraph (London)