The Thickety: A Path Begins (Hardcover) 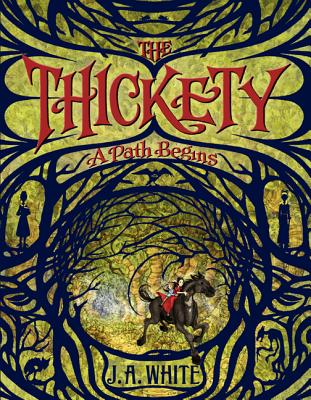 This is book number 1 in the The Thickety series.

"This creepy story of a village shadowed by a dark forest and a darker
power inside is not for the faint of heart. Luckily for Kara, she has
had to grow up strong, strong enough to bear the loss of her mother,
killed for being a witch; the burden of her father, crushed by guilt;
and the faith of her sickly younger brother, in need of a protector. And
then she finds out she’s a witch, a secret that brings power and danger
in equal measure. Don’t expect a cozy, heart-warming read, but do look
for a strong heroine, plenty of suspense, and a terrifyingly twisted
ending you won’t see coming."

The Thickety: A Path Begins is a spellbinding tale about a girl, the Thickety, and the power of magic. Fans of Neil Gaiman will love this thrilling new world.

When Kara Westfall was five years old, her mother was convicted of the worst of all crimes: witchcraft. Years later, Kara and her little brother, Taff, are still shunned by the people of their village, who believe that nothing is more evil than magic…except, perhaps, the mysterious forest that covers nearly the entire island. It has many names, this place. Sometimes it is called the Dark Wood, or Sordyr's Realm. But mostly it's called the Thickety.

The villagers live in fear of the Thickety and the terrible creatures that live there. But when an unusual bird lures Kara into the forbidden forest, she discovers a strange book with unspeakable powers. A book that might have belonged to her mother.

And that is just the beginning of the story.

J. A. White is the author of the Thickety series and Nightbooks. He lives in New Jersey with his wife, three sons, and the ghost of their hamster, Ophelia. When he’s not making up stories, he teaches a bunch of kids how to make up stories. He wishes dragons were real because it would be a much cooler way to get to work. You can visit him online at www.jawhitebooks.com.

“The Thickety is a sinister, magical debut with a marvelous and shocking heroine. J.A. White’s elegant writing and masterful plot kept me turning pages late into the night.”
— Lisa McMann, author of the New York Times bestselling The Unwanteds series

“The Thickety may give you nightmares, but it is a gripping story with a great heroine.”
— Angie Sage, #1 New York Times bestselling author of the Septimus Heap series

“Nail-biting suspense is the hallmark of this pleasantly accomplished debut. The spellbinding story, lashings of suspense and stalwart heroine will draw in fantasy fans and keep them reading until the bitter ending.”
— Kirkus Reviews (starred review)

“White’s debut novel is darkly bewitching. The well-crafted characters operate beautifully within the fantastical world he has created. Readers will devour each twist and turn of the plot, right up to the startling conclusion.”
— School Library Journal

“A startling plot twist at the end will have readers urgently waiting for a sequel, and it may even lead them right back into the book to see if they missed earlier clues.”
— The Bulletin of The Center for Children's Books