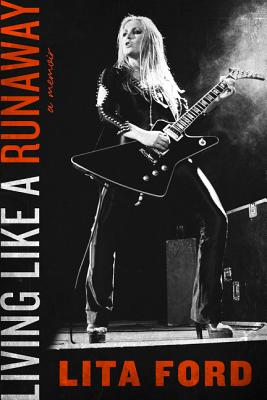 “Heavy metal’s leading female rocker (Rolling Stone) bares all, opening up about the Runaways, the glory days of the punk and hard-rock scenes, and the highs and lows of her trailblazing career

Wielding her signature black guitar, Lita Ford shredded stereotypes of female musicians throughout the 1970s and ‘80s. Then followed more than a decade of silence and darkness—until rock and roll repaid the debt it owed this pioneer, helped Lita reclaim her soul, and restored the Queen of Metal to her throne.

In 1975, Lita Ford left home at age sixteen to join the world’s first major all-female rock group, the Runaways—a “pioneering band” (New York Times) that became the subject of a Hollywood movie starring Kristen Stewart ad Dakota Fanning. Lita went on to become “heavy rock’s first female guitar hero” (Washington Post), a platinum-selling solo star who shared the bill with the Ramones, Van Halen, Motley Crue, Bon Jovi, Def Leppard, Poison, and others and who gave Ozzy Osbourne his first Top 10 hit. She was a bare-ass, leather-clad babe whose hair was bigger and whose guitar licks were hotter than any of the guys’.

Hailed by Elle as “one of the greatest female electric guitar players to ever pick up the instrument,” Lita spurred the meteoric rise of Joan Jett, Cherie Currie, and the rest of the Runaways. Her phenomenal talent on the fret board also carried her to tremendous individual success after the group’s 1979 disbandment, when she established herself as a “legendary metal icon” (Guitar World) and a fixture of the 1980s music scene who held her own after hours with Nikki Sixx, Jon Bon Jovi, Eddie Van Halen, Tommy Lee, Motorhead’s Lemmy, Black Sabbath’s Tony Iommi (to whom she was engaged), and others.

Featuring a foreword by Dee Snider, Living Like a Runaway also provides never-before-told details of Lita’s dramatic personal story. For Lita, life as a woman in the male-dominated rock scene was never easy, a constant battle with the music establishment. But then, at a low point in her career, came a tumultuous marriage that left her feeling trapped, isolated from the rock-and-roll scene for more than a decade, and—most tragically—alienated from her two sons. And yet, after a dramatic and emotional personal odyssey, Lita picked up her guitar and stormed back to the stage. As Guitar Player hailed in 2014 when they inducted her into their hall of fame of guitar greats: “She is as badass as ever.”

Fearless, revealing, and compulsively readable, Lita Ford’s Living Like a Runaway is the long-awaited memoir from one of rock’s greatest pioneers—and fiercest survivors.

Lita Ford was the lead guitarist of the Runaways before embarking on her platinum-selling, Grammy-nominated solo career. In 2014 Lita received Guitar Player’s Certified Legend Award and was inducted into their Hall of Fame. She lives in Southern California.

“Fearless. ... A vivid account of life as ‘the one-and-only guitar-playing rocker chick who could shred like I did.’ ... A fast-paced read... and an inspiring one.”
— Rolling Stone

“[A] fun, often hilarious coming-of-age memoir of a rocker chick who can rip through serious lead guitar solos as good -- or usually better -- than the next guy. ... Delightfully detailed. ... [Ford] tells plenty of colorful ‘80s rocker stories. ... Freewheeling.”
— Philadelphia Inquirer

“Ford is a surprisingly skilled raconteur - or is that rock-conteur. … The sex scenes provide the juice, but when she talks about learning solos straight from Blackmore, or out-jamming Holmes on stage, or writing songs with Osbourne, Ford proves that at heart she’s a great guitarist.”
— Los Angeles Times

“One of the greatest female electric guitar players to ever pick up the instrument.”
— Elle

“Lita Ford is the coolest and most rock-n-roll female guitarist I ever heard. No guitarist-male or female-ever looked better with a Hamer Explorer than Lita.”
— SLASH

“The mother of all metal.”
— Los Angeles Times

“Lita Ford, the shredding lead guitarist for the world’s first all-female rock band, the Runaways, tells her remarkable tale in Living Like a Runaway, a wild-ride musical memoir.”
— Parade

“Revealing [and] memorable. ... A celebration of Ford’s iconoclastic, take-no-shit spirit.”
— Consequence of Sound

“A chronicle of life as a woman in the male-dominated metal scene, Living Like a Runaway has been netting rave reviews; who says you can’t raise up the metal horns for a little literature?”
— Gothamist

“Required reading for any aspiring musician. ... Frank and funny. A page turner.”
— Goldmine

“Jam packed with stories of a truly eventful -- and impressive -- rock and roll life.”
— Guitar World