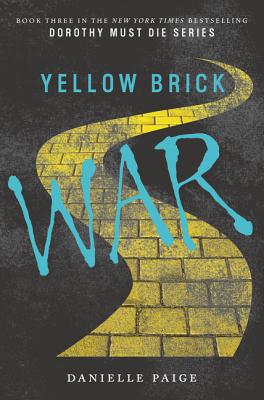 This is book number 3 in the Dorothy Must Die series.

In this third book in the New York Times bestselling Dorothy Must Die series, new girl from Kansas Amy Gumm is caught between her home—and Oz.

My name is Amy Gumm. Tornadoes must have a thing about girls from Kansas, because—just like Dorothy—I got swept away on one too. I landed in Oz, where Good is Wicked, Wicked is Good, and the Wicked Witches clued me in to my true calling: Assassin.

The way to stop Dorothy from destroying Oz—and Kansas—is to kill her. And I’m the only one who can do it.

But I failed. Others died for my mistakes. Because of me, the portal between the worlds has been opened. And if I don’t find a way to close it?

Dorothy will make sure I never get to go home again.

Now it’s up to me to: join the Witches, fight for Oz, save Kansas, and stop Dorothy once and for all.

Praise for the DOROTHY MUST DIE series: “Readers of Baum’s books will take special delight in seeing new twists on the old characters, and they will greet the surprise climactic turnabout with the smugness of insiders.” — Kirkus Reviews

“Dorothy Must Die is kind of the ultimate in girl-powered literature. Here, women and girls are allowed to be anything.” — Nerdist.com

“Paige doesn’t hold back in this fast-paced action novel. Give this cinematic upper-YA novel to fans of A. G. Howard’s Splintered, Frank Beddor’s Looking Glass Wars, and TV shows such as Once Upon a Time and Grimm.” — School Library Journal

“Paige is creating a rather brilliantly twisted version of the familiar world of Oz.” — Bulletin of the Center for Children’s Books

“Paige has embellished upon the original Wizard of Oz story to create a completely new, even more bizarre Oz and cast of characters. Her world building is fascinating.” — Booklist