Smoke: How a Small-Town Girl Accidentally Wound Up Smuggling 7,000 Pounds of Marijuana with the Pot Princess of Beverly Hills (Paperback) 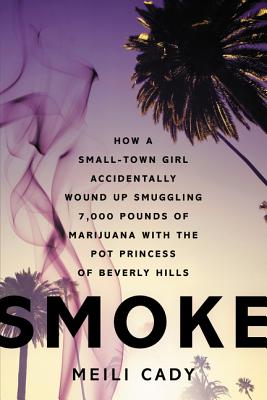 Combining the excess of The Bling Ring with the intimacy of Blow and the charm of Catch Me If You Can, an outrageous, entertaining and true story of an aspiring young actress’ ill-fated friendship and unwitting alliance with a drug smuggling “heiress.”

Aspiring actress Meili Cady left small-town Washington State for the glamorous lure of Los Angeles. Young and alone, she was struggling to make her big break. Then she met Lisette Lee. Calling herself the “Korean Paris Hilton,” Lisette claimed she was a model and a Korean pop star, lived in a $1.2 million dollar apartment in West Hollywood, owned a fleet of luxury cars, and flitted from one red-carpet event to the next.

The connection was instant. Meili was enchanted by her friend’s extravagant lifestyle, while Lee claimed Meili was the real thing in a town full of phonies. Soon, the financially strapped Meili became her friend’s personal assistant—and found herself sucked into an audacious criminal enterprise. But when Meili finally realized what she was a part of it was too late—she was in too deep, caught in a terrifying relationship with a manipulative and abrasive con artist smuggling millions of dollars of pot into the Midwest.

Trapped in a precarious criminal world of money, drugs, and dangerous secrets, Meili struggled to understand the line between truth and lie. A once naive girl who fell down the rabbit hole, she could only watch helplessly as it all came crashing down around her. Smoke is her story—an electrifying tale of vice, corruption, hubris, and lost innocence as shocking and entertaining as The Wolf of Wall Street and Bringing Down the House.

A native of Bremerton, Washington, Meili Cady starred as the lead actress in the Showtime comedy film Chick Magnet, and has appeared on Californication and other television shows. After a brief stint in a federal prison camp, Meili began the blog House Arrest Girl while she served a year of home confinement. She lives in Los Angeles, California.

“A wildly entertaining ride . . . has everything you loved about Serial, The Bling Ring, Blow, Catch Me If You Can, and even Orange Is The New Black . . . will have you at the edge of your seat.”-B&N Book Blog
— B&N Book Blog

“[A] tale of love and loyalty gone awry [that] will keep fans of true crime reading.”
— Library Journal

“Cady sends you careening down a rabbit hole where bad decisions are met with good humor…and a duffel bag stuffed with six-figures in cash.”
— Allie Kingsley, author of The Liar, the Bitch and the Wardrobe