The Enchanted: A Novel (Hardcover) 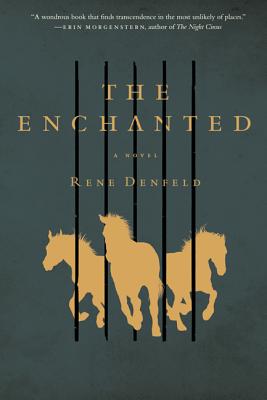 By Rene Denfeld
Not available to order

I have never come across a book quite like this one before. The Enchanted
is a story as dark and ridden with despair as it is beautiful and
hopeful. Told by an anonymous inmate on death row, it allows us to peek
through a keyhole into the human soul. The narrator’s ability to portray
the prison as an enchanted place will alone plant a seed of awe in you.
The story revolves around York, a death row inmate whose execution day
is rapidly approaching. He’s appointed a public defender who is only
referred to as The Lady. York refuses his right to a public defender,
claiming he is ready for death. Plagued by the curious nature of his
request and her own troubled past, The Lady begins to dig into York’s
history.Read Jessica's full review!

A wondrous and redemptive debut novel, set in a stark world where evil and magic coincide, The Enchanted combines the empathy and lyricism of Alice Sebold with the dark, imaginative power of Stephen King.

"This is an enchanted place. Others don’t see it, but I do." The enchanted place is an ancient stone prison, viewed through the eyes of a death row inmate who finds escape in his books and in re-imagining life around him, weaving a fantastical story of the people he observes and the world he inhabits. Fearful and reclusive, he senses what others cannot. Though bars confine him every minute of every day, he marries visions of golden horses running beneath the prison, heat flowing like molten metal from their backs with the devastating violence of prison life.

Two outsiders venture here: a fallen priest and the Lady, an investigator who searches for buried information from prisoners’ pasts that can save those soon-to-be-executed. Digging into the background of a killer named York, she uncovers wrenching truths that challenge familiar notions of victim and criminal, innocence and guilt, honesty and corruption—ultimately revealing shocking secrets of her own.

Beautiful and transcendent, The Enchanted reminds us of how our humanity connects us all, and how beauty and love exist even amidst the most nightmarish reality.

Rene Denfeld is an internationally bestselling author, licensed investigator, and foster mother. She is the author of the novels The Butterfly Girl, The Child Finder and The Enchanted. Her novels have won numerous awards including a French Prix, and The New York Times named her a 2017 hero of the year for her justice work. She lives in Portland, Oregon.

“[An] impressive debut. . . . Read this magical book, and prepare to be spellbound.”
— Library Journal (starred review)

“Rene Denfeld is a genius. In The Enchanted, she has imagined one of the grimmest settings in the world—a dank and filthy death row in a corrupt prison—and given us one of the most beautiful, heart-rending, and riveting novels I have ever read.”
— Donald Ray Pollock, author of The Devil All The Time

“The Enchanted wrapped its beautiful and terrible fingers around me from the first page and refused to let go after the last. A wondrous book that finds transcendence in the most unlikely of places . . . So dark yet so exquisite.”
— Erin Morgenstern, author of The Night Circus

“The Enchanted is unlike anything I’ve ever read. . . . Contagious and seductive. The reader comes to see through Denfeld’s strange lens, and to savor the richness of the view long after the final page has turned.”
— Katherine Dunn, author of Geek Love

“Evocative. . . . Denfeld’s humanizing of the potential for horror that is within all of us and her insistence that the reader see the beauty in the darkest corners of life sizzles through her sharp prose, which both makes us flinch and invites us to imagine.”
— Booklist

“The Enchanted explores the complexities of many crucial issues, including how we treat our children and the vulnerable and the consequences of our actions. It also makes us ask whether our personal behavior, social policies, and the justice system perpetuate more pain than otherwise for humanity.”
— New York Journal of Books

“If you enjoy mystery and suspense as well as a bit of magic and horror you will find it all here. The story is enthralling and keeps you reading far into the night.”
— Seattle Post-Intelligencer

“The Enchanted is instead a testament to the power of words, of language and symbols to reshape one’s reality, and it is an extraordinarily empathetic look at the sorrows and joys of even the worst aspects of human life.”
— The Oregonian