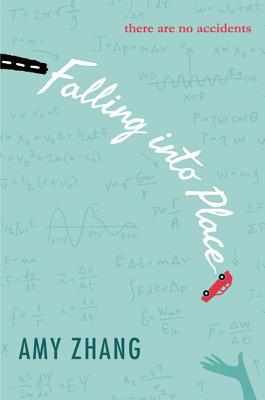 One cold fall day, high school junior Liz Emerson steers her car into a tree. This haunting and heartbreaking story is told by a surprising and unexpected narrator and unfolds in nonlinear flashbacks even as Liz's friends, foes, and family gather at the hospital and Liz clings to life. This riveting debut will appeal to fans of Before I Fall, by Lauren Oliver, and 13 Reasons Why, by Jay Asher.

"On the day Liz Emerson tries to die, they had reviewed Newton's laws of motion in physics class. Then, after school, she put them into practice by running her Mercedes off the road." Why did Liz Emerson decide that the world would be better off without her? Why did she give up? The nonlinear novel pieces together the short and devastating life of Meridian High's most popular junior girl. Mass, acceleration, momentum, force—Liz didn't understand it in physics, and even as her Mercedes hurtles toward the tree, she doesn't understand it now. How do we impact one another? How do our actions reverberate? What does it mean to be a friend? To love someone? To be a daughter? Or a mother? Is life truly more than cause and effect? Amy Zhang's haunting and universal story will appeal to fans of Lauren Oliver, Gayle Forman, and Jay Asher.

Amy Zhang was born in China and moved to the United States when she was a young girl. She grew up in Wisconsin and recently graduated from college. She is the author of Falling into Place and This is Where the World Ends, and she currently lives in Brooklyn, New York.

“The breezy yet powerful and exceptionally perceptive writing style, multifaceted characters, surprisingly hopeful ending, and pertinent contemporary themes frame an engrossing, thought-provoking story that will be snapped up by readers of Todd Mitchell’s Backwards and Gayle Forman’s If I Stay.” — School Library Journal

“The haunting story of a suicide attempt gone awry as high school junior Liz Emerson drives her Mercedes off the road, winding up in a coma…Zhang writes with confidence and finesse, and many readers will be moved as Liz recognizes the lives she has damaged.” — Kirkus Reviews

“An impressive debut . . . should appeal to readers who sobbed through Jay Asher’s Thirteen Reasons Why.” — Booklist

“Amy Zhang crashes onto the YA scene with this debut novel about a physics student who puts Newton’s Laws of Motion into practice by driving her Mercedes into a tree. . . . A good pick for fans of Lauren Oliver’s Before I Fall and Gayle Forman’s If I Stay.” — Shelf Awareness for Readers

“Insightful . . . it’s interesting to see the mean girl through the eyes of the people who love her, despite (and sometimes because of ) her flaws.” — Bulletin of the Center for Children’s Books