Dark Invasion: 1915: Germany's Secret War and the Hunt for the First Terrorist Cell in America (Hardcover) 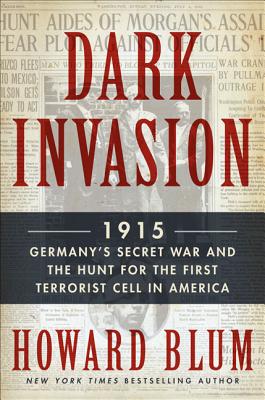 "In 1915, while Europe was in the throes of the Great War and America was wholly committed to keeping itself neutral, the Imperial German Intelligence services launched a savage and very secret war on American soil to curtail the shipments of artillery shells and ammunition that the Allies were buying from the United States. In this absorbing book, Harold Blum casts a light on a forgotten time in American history – a time of great treachery and deceit that not many people are aware of. Blum's book reads like a combination of police procedural and white knuckle thriller – that is all factual makes it all the more shocking."

“Dark Invasion is about German Spies in America before the start of WWI, and I don’t even like stories about spies or WWI! I’ve never read anything by Blum before, but I picked this up and it reads like a thriller. It’s entirely fascinating and it doesn’t even read like a history book. The most interesting character is the head of the New York Bomb Squad whom Blum refers to as the first Head of Homeland Security and an unsung hero. It was his job to stop all these German spies from terrorizing America. I had no clue that the Germans had actually managed to set off a bomb inside the US Capitol building. If you pick up this book, you will enjoy it.”

Combining the pulsating drive of Showtime's Homeland with the fascinating historical detail of such of narrative nonfiction bestsellers as Double Cross and In the Garden of Beasts, Dark Invasion is Howard Blum’s gritty, high-energy true-life tale of German espionage and terror on American soil during World War I, and the NYPD Inspector who helped uncover the plot—the basis for the film to be produced by and starring Bradley Cooper.

When a “neutral” United States becomes a trading partner for the Allies early in World War I, the Germans implement a secret plan to strike back. A team of saboteurs—including an expert on germ warfare, a Harvard professor, and a brilliant, debonair spymaster—devise a series of “mysterious accidents” using explosives and biological weapons, to bring down vital targets such as ships, factories, livestock, and even captains of industry like J. P. Morgan.

New York Police Inspector Tom Tunney, head of the department’s Bomb Squad, is assigned the difficult mission of stopping them. Assembling a team of loyal operatives, the cunning Irish cop hunts for the conspirators among a population of more than eight million Germans. But the deeper he finds himself in this labyrinth of deception, the more Tunney realizes that the enemy’s plan is far more complex and more dangerous than he suspected.

Full of drama and intensity, illustrated with eight pages of black and-white photos, Dark Invasion is riveting war thriller that chillingly echoes our own time.

Howard Blum is the author of the New York Times bestseller and Edgar Award winner American Lightning, as well as Wanted!, The Gold of Exodus, Gangland, The Floor of Heaven, and, most recently, a 2018 New York Times Notable Book: In the Enemy's House. Blum is a contributing editor at Vanity Fair. While at the New York Times, he was twice nominated for a Pulitzer Prize for investigative reporting. He is the father of three children, and lives in Connecticut.

“Howard Blum’s riveting and perturbing Dark Invasion…is well-researched and written, and it maintains a fairly high level of suspense, which is difficult to bring off in a book about historical events.” — Wall Street Journal

“Dark Invasion…will move you to the edge of your seat with the facts alone, but the author’s suspenseful detective-mystery narrative is what keeps you there.” — USA Today

“Howard Blum’s story of the sinister and scary German terror attacks on America 100 years ago reads more like a LeCarré novel than a meticulous reconstruction of history.. This is a terrific spy story.” — Cokie Roberts, author of Founding Mothers

“Dark Invasion is a must-read for lovers of suspense and anyone who wants to understand how the basis of our homeland security system was born.” — Tom Reiss, New York Times bestselling author of The Black Count and The Orientalist

“History is all about retelling tales that need telling. In Dark Invasion, Howard Blum has rescued a batch of compelling ones and woven them into grim, fascinating remembrance.” — Dallas Morning News

“Throws light on the war of espionage and terror Germany waged against the U.S. in 1915.” — Vanity Fair

“Blum briefs us on early homeland security with tales of German terrorists, including military officers, a germ-warfare expert, a Harvard prof and a document forger.” — New York Post, “Required Reading”

“a spy thriller of the first order….Dark Invasion is another page-turner that is compelling…. [Blum] has a remarkable talent for both uncovering history’s most inexplicably forgotten stories…and for writing non-fiction paced like a big-budget thriller.” — Daily Beast

“Sounds like a pretty good espionage thriller…In fact, it’s nothing less than authentic—albeit long-forgotten—American history, brought to vivid life…Dark Invasion reminds us…that ‘the past is never past’.” — Life.com

“Terrifically engaging and pertinent tale of the New York City bomb squad that foiled German terrorist plots against the United States at the outbreak of World War I.… Instructive, yes, but also as engrossing as good detective fiction.” — Kirkus Reviews (starred review)

“Blum’s narrative of America’s first exercise in homeland security is a worthwhile page-turner, combining the best features of a police procedural and a spy novel with a firm base in verifiable events.” — Publishers Weekly

“A suspense-filled tale, Dark Invasion uncovers a fascinating corner of history when courageous New York City police officers fought insurmountable odds to defend America against sophisticated German saboteurs at the start of World War I.” — Ronald Kessler, author of The Secrets of the FBI and In the President's Secret Service

“In his gripping and expertly crafted narrative, Blum demonstrates that the best stories are true. Told in the great tradition of spy thrillers, Dark Invasion is the startling tale of German secret agents operating in the United States.” — Scott Miller, author of The President and the Assassin: McKinley, Terror, and Empire at the Dawn of the American Century

“I read Dark Invasion without stopping. It is a well-researched and exceedingly well-written account of a pre-World War I series of terroristic attacks on the United States, in this case perpetrated by Germans. It is full of good stories and characters.” — Norman Stone, award-winning author of The Eastern Front: 1914-1917 and World War One: A Short History

“This is a wonderful story, with a cast of characters out of a Cecil B. DeMille epic, told in a style that is lucid, lyrical, even electric. Narrative history at its very best.” — Joseph J. Ellis, Pulitzer Prize-winning author of FOUNDING BROTHERS and AMERICAN CREATION, on American Lightning

“Howard Blum has given us a fascinating–and hugely entertaining–glimpse into early 20th-century America.…And–eat your hearts out, novelists–it’s all true.” — John Steele Gordon, author of EMPIRE OF WEALTH: THE EPIC HISTORY OF AMERICAN ECONOMIC POWER, on American Lightning

“Blum…writes a gripping epic of a sordid terror plot and murder most foul …. [He[ makes great use of short chapters and episodic shifts that both prevent tedium and compel the reader forward through each twist and turn.” — Library Journal (starred review)