The Hand on the Wall (Truly Devious #3) (Hardcover) 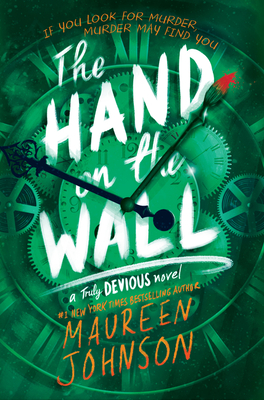 This is book number 3 in the Truly Devious series.

New York Times bestselling author Maureen Johnson delivers the witty and pulse-pounding conclusion to the Truly Devious series as Stevie Bell solves the mystery that has haunted Ellingham Academy for over 75 years.

Ellingham Academy must be cursed. Three people are now dead. One, a victim of either a prank gone wrong or a murder. Another, dead by misadventure. And now, an accident in Burlington has claimed another life. All three in the wrong place at the wrong time. All at the exact moment of Stevie’s greatest triumph . . .

She knows who Truly Devious is. She’s solved it. The greatest case of the century.

At least, she thinks she has. With this latest tragedy, it’s hard to concentrate on the past. Not only has someone died in town, but David disappeared of his own free will and is up to something. Stevie is sure that somehow—somehow—all these things connect. The three deaths in the present. The deaths in the past. The missing Alice Ellingham and the missing David Eastman. Somewhere in this place of riddles and puzzles there must be answers.

Then another accident occurs as a massive storm heads toward Vermont. This is too much for the parents and administrators. Ellingham Academy is evacuated. Obviously, it’s time for Stevie to do something stupid. It’s time to stay on the mountain and face the storm—and a murderer.

Praise for the Truly Devious series:

“Readers, hang tight: there’s one more round to come, and if the signs are right, it’ll be to die for.” —Publishers Weekly (starred review)

"In this hotly anticipated trilogy finale, Johnson pulls out all the stops, filling the thrillingly nimble narrative with classic mystery conventions. A striking foray into an examination of what mysteries can ever truly be solved, and a satisfying send-off for a series that will be missed."
— Booklist

“Maureen Johnson brings her delectable ‘Truly Devious’ murder mystery trilogy to a thrilling conclusion, neatly tying together her dueling narrative threads, one set in 1936 and the other in the present day, with an action-packed finale during a blizzard at Ellingham Academy in the mountains of Vermont.”
— Buffalo News

"This will be essential reading for the many fans of the first two books. This trilogy ender is fun, satisfying, and a genuine treat for teens and adult mystery fans."
— School Library Journal

“Readers will be eager to know the novel’s conclusion but will never want the book to end. Replete with intrigue, thoughtfulness, and depth, The Hand on the Wall is a mystery of the moment and for the ages.”
— San Francisco Book Review

“This was an absolutely perfect finale to an engaging series.”
— YA Books Central

"This inclusive, inventive, and vastly entertaining series has been a boon to YA literature. As a layered, complex character who solves crime while also battling anxiety, Stevie Bell reads like the redoubtable love child of Jessica Fletcher and Adrian Monk. There will hopefully be more Stevie Bell mysteries to come."
— Horn Book Magazine

“This hip mystery trilogy finale is an addictive page-turner that piles on the murder plots and intrigue in two time periods. This is the kind of absorbing series that teens and up will be reading and rereading for years to come.”
— Common Sense Media

“With a cast of unique and lovable characters, The Hand on the Wall is an exciting read. You’ll be wondering the whole time who did it and rooting for Stevie with the case, and maybe a little bit with her love life as well. I highly recommend this book to anyone who loves a good mystery.”
— Suspense Magazine

“A gripping page-turner with twists and turns nestled within every book, this intertwining mystery series is written to seamlessly blend into the next…. Sherlock Holmes collides with Nancy Drew in this modern day crime mystery.”
— Independent Voice Newspaper

Praise for TRULY DEVIOUS “Be still, my Agatha-Christie-loving beating heart.”

“Jumping between past and present, Johnson’s novel is deliciously atmospheric, with a sprawling cast of complex suspects/potential victims, surprising twists, and a dash of romance. As in her Shades of London books, Johnson remains a master at combining jittery tension with sharp, laugh-out-loud observations.”
— Publishers Weekly (starred review)

“Remember the first time reading Harry Potter and knowing it was something special? There’s that same sense of magic in the introduction of teen Sherlock-in-training Stevie Bell. Parallel mysteries unfold with cleverly written dialogue, page-turning brilliance and a young sleuth just as captivating as Hercule Poirot.”
— USA Today (four stars)

“A suspenseful, attention-grabbing mystery with no clear solution. The versatile Johnson is no stranger to suspense, and this twisty thriller will leave plenty of readers anxious for more.”
— Booklist

Praise for THE VANISHING STAIR “In this second . . . installment, Johnson gives and she takes away: a few major mysteries are satisfying solved, but other long-standing riddles remain tantalizingly indecipherable, and several new ones come into play by the enigmatic end. Readers, hang tight: there’s one more round to come, and if the signs are right, it’ll be to die for.”

"Ramps up the intrigue. Throughout this volume, Johnson's compelling would-be Sherlock proves to be as bad at personal relationships as she is adept at solving mysteries. Teen angst soars as Johnson delightfully conjures up more nefarious deeds from the mountain mist."
— Kirkus Reviews (starred review)