The Whiz Mob and the Grenadine Kid (Hardcover) 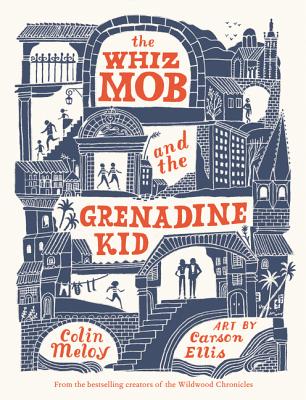 By Colin Meloy, Carson Ellis (Illustrator)
$17.99
Not available to order.

From the creators of the New York Times bestselling Wildwood Chronicles comes an original, humorous, and fast-paced middle grade novel about a band of child pickpockets—imagine The Invention of Hugo Cabret meets Oliver Twist.

It is an ordinary Tuesday morning in April when bored, lonely Charlie Fisher witnesses something incredible. Right before his eyes, in a busy square in Marseille, a group of pickpockets pulls off an amazing robbery. As the young bandits appear to melt into the crowd, Charlie realizes with a start that he himself was one of their marks.

Yet Charlie is less alarmed than intrigued. This is the most thrilling thing that’s happened to him since he came to France with his father, an American diplomat. So instead of reporting the thieves, Charlie defends one of their cannons, Amir, to the police, under one condition: he teach Charlie the tricks of the trade.

What starts off as a lesson on pinches, kicks, and chumps soon turns into an invitation for Charlie to join the secret world of the whiz mob, an international band of child thieves who trained at the mysterious School of Seven Bells. The whiz mob are independent and incredibly skilled and make their own way in the world—they are everything Charlie yearns to be. But what at first seemed like a (relatively) harmless new pastime draws him into a dangerous adventure with global stakes greater than he could have ever imagined.

Colin Meloy is the author of The Whiz Mob and the Grenadine Kid and the New York Times bestselling Wildwood Chronicles as well as two picture books, The Golden Thread: A Song for Pete Seeger and Everyone’s Awake. He is also the singer and songwriter for the indie rock band the Decemberists. Colin lives in Oregon with his wife and frequent collaborator, illustrator Carson Ellis, and their sons.

Carson Ellis is the illustrator of a number of books for children, including the Wildwood Chronicles, and is the author and illustrator of the picture books Du Iz Tak?, a Caldecott Honor winner, and Home. Carson lives just outside Portland, Oregon, with her family.

★ “There’s a lot to be said for a good, old-fashioned caper. Meloy accomplishes this rare feat with panache, turning out an infectious—and at times cinematic—adventure suffused with personal growth, secrecy, sleight of hand, and higher stakes than the story’s protagonist ever imagined.” — Booklist (starred review)

“Meloy mirrors his characters’ capers, distracting you while he moves in for the real con. It’s a bona fide twist that may make you feel robbed yourself. In this case, that’s a good thing.” — New York Times Book Review

“Meloy and Ellis (the Wildwood Chronicles) blend shades of Dickens, Rowling, and Robin Hood. Themes of friendship and making amends are skillfully woven throughout. And Meloy’s attention to detail vividly evoke the period setting.” — Publishers Weekly