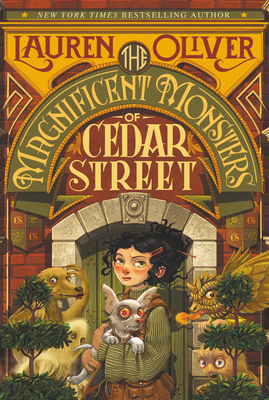 "Newt Scamander has nothing on Cordelia Clay. When her father and their motley menagerie of rescued and carefully tended magical creatures disappear one night, she and her friend Gregory determines to follow their (slimy green) trail along with a baby dragon, a flatulant filch, and a loyal zuppy (zombie puppy) in Lauren Oliver's rousing adventure about love, loyalty, evolutionary science, and the true nature of monstrosity."

From the bestselling author of E. B. White Read-Aloud Honor Book Liesl & Po comes a timely and relevant adventure story about monsters of all kinds—and a girl brave enough to save them.

Cordelia Clay loves the work she and her father do together: saving and healing the remarkable creatures around Boston at the end of the nineteenth century. Their home on Cedar Street is full to the brim with dragons, squelches, and diggles, and Cordelia loves every one of them.

But their work must be kept secret—others aren’t welcoming to outsiders and immigrants, so what would the people of Boston do to the creatures they call “monsters”?

One morning, Cordelia awakens to discover that her father has disappeared—along with nearly all the monsters.

With only a handful of clues and a cryptic note to guide her, Cordelia must set off to find out what happened to her father, with the help of her new friend Gregory, Iggy the farting filch, a baby dragon, and a small zuppy (zombie puppy, that is).

“In this grimy, Dickensian world, an alternate-history Gilded Age, vast wealth coexists with grinding poverty and fear of the other runs deep: Where fear rules, difference is the enemy... The monsters are standouts, manifesting, like all animals, unique natural attributes and proclivities (described in a comprehensive guide). Charming or alarming, these creatures and their world, rendered in abundant, imaginative detail, beg for further exploration.” — Kirkus Reviews (starred review)

"Oliver’s imaginative story combines exquisite descriptions with a spirited narrative, and readers will delight in the quirky creatures and settings." — ALA Booklist

"Oliver’s marvelous historical fantasy hits just the right tone of sincerity and whimsy; alongside weighty themes 'of violence, of hatred, of cages and isolation,' an excerpt from A Guide to Monsters and Their Habits describes many of the beasties in enough detail to ground the premise and bring the monsters to life, and occasional illustrations by Aldridge give a realistically fantastic feel to the meaningful text." — Publishers Weekly (starred review)

"Oliver retains a keen sense for the emotional dynamics of pre-adolescent girl friendships. The recurring meditations on the true nature of monstrosity and the unjust devaluing of lives may offer routes into timely conversations about the lives our own time devalues." — Bulletin of the Center for Children’s Books

“Oliver’s wordplay is often clever (“the daylight…was starting to seep across the cluttered countertops like the drool of a Mattahorn salivus”), and her collection of monsters is creative and thorough. Cordelia and Gregory face instances of peril that are exciting without feeling too dangerous, and the book’s secondary characters, both human and monster, add much to the story.” — Horn Book Magazine

"Oliver’s characters leap off the page and readers of all ages will find themselves eagerly rooting them on and clamoring for more as their story ends. Hand this to fans of adventure, magical creatures, and epic quests." — School Library Journal (starred review)