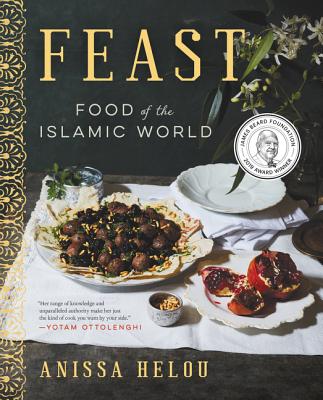 "[Helou's] range of knowledge and unparalleled authority make her just the kind of cook you want by your side when baking a Moroccan flatbread, preparing an Indonesian satay and anything else along the way."— Yotam Ottolenghi

In Feast, award-winning chef Anissa Helou—an authority on the cooking of North Africa, the Mediterranean, and the Middle East—shares her extraordinary range of beloved, time-tested recipes and stories from cuisines throughout the Muslim world.

Helou has lived and traveled widely in this region, from Egypt to Syria, Iran to Indonesia, gathering some of its finest and most flavorful recipes for bread, rice, meats, fish, spices, and sweets. With sweeping knowledge and vision, Helou delves into the enormous variety of dishes associated with Arab, Persian, Mughal (or South Asian), and North African cooking, collecting favorites like biryani or Turkish kebabs along with lesser known specialties such as Zanzibari grilled fish in coconut sauce or Tunisian chickpea soup. Suffused with history, brought to life with stunning photographs, and inflected by Helou’s humor, charm, and sophistication, Feast is an indispensable addition to the culinary canon featuring some of the world’s most inventive cultures and peoples.

Anissa Helou is a writer, journalist, and broadcaster. Born and raised in Beirut, Lebanon, she knows the Mediterranean as only a well-traveled native can. Lebanese Cuisine, her first book, was nominated for the prestigious Andre Simon Award and was named one of the best cookbooks of 1998 by the Los Angeles Times. Mediterranean Street Food was described by the New York Times as "a marvelous book." It won the Gourmand World Cookbook Award 2002 as the best Mediterranean cuisine book in English. Helou lives in London, where she has her own cooking school, Anissa's School. She appears frequently on British television and radio. She has written many articles for the Weekend Financial Times, and has contributed to several other publications including Gourmet, the Chicago Tribune, and the Washington Post. An accomplished photographer and intrepid traveler, Helou is fluent in French and Arabic as well as English.

“Telling a genuine food story that covers a quarter of the world’s population is a mighty task...One person who can wrestle with such a challenge is Anissa Helou. Her range of knowledge and unparalleled authority make her just the kind of cook you want by your side.”
— Yotam Ottolenghi

“Helou’s recipes gracefully capture this world where food, religion, and culture are deeply intertwined, opening it to a broader audience and presenting it unfiltered.” — Taste

“...[D]ives deep into Islamic food culture and history... ’For a comprehensive selection, I would have needed more than one volume,’ and reading this engrossing book, one might wish she had more than one.” — Food & Wine

“Anissa Helou stops at nothing when it comes to research. Every recipe. . . is brought to life by its origin story and by Helou’s own experiences.” — Saveur

“Masterly...Helou captures the joy with which most Islamic communities regard food...Feast offers the perfect guide to the great cuisines of the Islamic world.” — Hidustan Times

“Helou is both scholar and hedonist, which makes for the best kind of guide in the kitchen.” — Bon Appétit

“This substantial, meticulously researched cookbook is a gem, not only because of its in-depth and vast culinary information, but also because it includes an overview of Muslim world history, buttressed with helpful maps and stimulating stories.” — Forbes

“Weaving in culinary history, the author of Lebanon takes readers on a tour of Arab, Persian, and North African cooking.” — Publishers Weekly

“Don’t miss the history lessons and miniature profiles throughout: In Feast, Helou opens new doors in an area of the world that’s often figuratively or literally completely closed off.” — Eater