For a Muse of Fire (Hardcover) 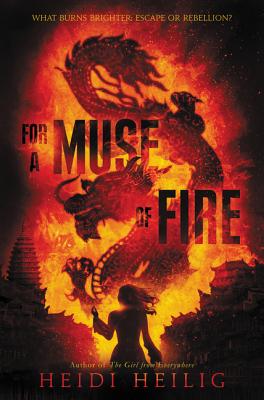 “Be prepared to stay up late with this one.”—NPR.org

A young woman with a dangerous power she barely understands. A smuggler with secrets of his own. A country torn between a merciless colonial army, a terrifying tyrant, and a feared rebel leader. The first book in acclaimed author Heidi Heilig’s Shadow Players trilogy blends traditional storytelling with ephemera for a lush, page-turning tale of escape and rebellion. For a Muse of Fire will captivate fans of Sabaa Tahir, Leigh Bardugo, and Renée Ahdieh.

Jetta’s family is famed as the most talented troupe of shadow players in the land. With Jetta behind the scrim, their puppets seem to move without string or stick—a trade secret, they say. In truth, Jetta can see the souls of the recently departed and bind them to the puppets with her blood. But ever since the colonizing army conquered their country, the old ways are forbidden. Jetta must never show, never tell. Her skill and fame are her family’s way to earn a spot aboard the royal ship to Aquitan, where shadow plays are the latest rage, and where rumor has it the Mad King has a spring that cures his ills. Because seeing spirits is not the only thing that plagues Jetta. But as rebellion seethes and as Jetta meets a young smuggler, she will face truths and decisions that she never imagined—and safety will never seem so far away.

Heidi Heilig creates a vivid, rich world inspired by Southeast Asian cultures and French colonialism. Told from Jetta’s first-person point-of-view, as well as chapters written as play scripts and ephemera such as telegrams and letters, For a Muse of Fire is an engrossing journey that weaves magic, simmering romance, and the deep bonds of family with the high stakes of epic adventure.

For a Muse of Fire. Her debut novel, The Girl from Everywhere, was an Indie Next Pick and was also named a Best Book of the Year by NPR. Heidi Heilig holds an MFA from New York University in musical theatre writing, and she’s written the book and lyrics for several shows. She lives in Brooklyn, New York, with her family. www.heidiheilig.com

“An ambitious, big-souled wonder of a book, For a Muse of Fire cements Heilig as one of YA’s great creators of fascinating fantasy worlds. She spins a tale of rebellion and refugees, beauty and vulnerability, art and ugliness. It’s complicated and soaring, full of magic and pain.” — Melissa Albert, New York Times-bestselling author of The Hazel Wood

“Intensely original, creatively complex—Heilig’s fantastical world is a place like nothing I’ve seen before, and one I am desperate to revisit immediately! I was captivated by Jetta from the start, and I was left stunned and bereft by the end, cursing Heilig for leaving me wanting more. Do not miss this emotionally beautiful fantasy about a complex girl you can’t help but come to love.” — Ellen Oh, author of Prophecy

“For a Muse of Fire is full of magic and danger, heartbreak and love. The book’s playfulness of form deepens the story’s truth, and the characters are complex and compelling. I loved it.” — Kat Howard, author of An Unkindness of Magicians

“Masterful and daring, Heilig deftly takes this story from a modest family stage to the grand theater of war and rebellion.” — Natalie C. Parker, author of Seafire and Beware the Wild

“This start to a new trilogy is fast-paced and gripping while also offering readers a thoughtful commentary on the long-lasting ramifications of war and colonization. ...This must-have story with an inclusive cast, high stakes, and an intense cliff-hanger will leave readers clamoring for the next installment.” — School Library Journal (starred review)

“A lush land reminiscent of South Asia is the setting for a thrilling trilogy opener by Heilig. ...Telegrams, letters, and play scenes sprinkled throughout create a strong sense of place, and Jetta’s struggle to accept herself is relatable. Heilig uses intricate prose to animate nuanced characters and action-packed scenes in this immersive, epic fantasy.” — Publishers Weekly

“Following on the heels of Heilig’s delightful debut series, For a Muse of Fire has big shoes to fill. It succeeds in full, while aiming for even greater heights in characterization, worldbuilding, and narrative. It turns a painful and honest gaze on complex issues. Be prepared to stay up late with this one.” — NPR.org

“Evocative and refreshingly unique. ...A nuanced, heartrending story that will leave you shattered and begging for more. ... For a Muse of Fire is the anti-colonial, mental illness #ownvoices, POC-centered, female-led, young adult epic fantasy you never knew you wanted.” — Tor.com