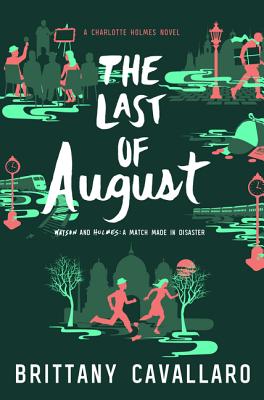 This is book number 2 in the Charlotte Holmes Novel series.

In the second brilliant, action-packed book in the Charlotte Holmes series, Jamie Watson and Charlotte Holmes are in a chase across Europe to untangle a web of shocking truths about the Holmes and Moriarty families.

Jamie and Charlotte are looking for a winter break reprieve in Sussex after a fall semester that almost got them killed. But nothing about their time off is proving simple, including Holmes and Watson’s growing feelings for each other.

When Charlotte’s beloved Uncle Leander goes missing from the Holmes estate—after being oddly private about his latest assignment in a German art forgery ring—the game is afoot once again, and Charlotte throws herself into a search for answers.

So begins a dangerous race through the gritty underground scene in Berlin and glittering art houses in Prague, where Holmes and Watson discover that this complicated case might change everything they know about their families, themselves, and each other.

“Beautiful prose, thrilling action, a touch of romance, and two complicated heroes to root for make this a not-to-be-missed sequel. Readers will be craving the final book in the trilogy.” — Booklist (starred review)

“Debut author Cavallaro brings Arthur Conan Doyle’s sleuths (or their distant relatives, anyway) into the 21st century, casting Holmes as a brilliant young woman and Watson, who narrates, as her admirer and accomplice...An involving murder mystery, and a promising start to a planned trilogy.” — Publishers Weekly on A Study in Charlotte