The Rest of Us Just Live Here (Paperback) 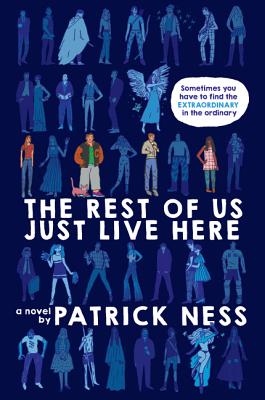 A bold and irreverent YA novel that powerfully reminds us that there are many different types of remarkable, The Rest of Just Live Here is from novelist Patrick Ness, author of the Carnegie Medal- and Kate Greenaway Medal-winning A Monster Calls and the critically acclaimed Chaos Walking trilogy.

What if you aren't the Chosen One? The one who's supposed to fight the zombies, or the soul-eating ghosts, or whatever the heck this new thing is, with the blue lights and the death?

What if you're like Mikey? Who just wants to graduate and go to prom and maybe finally work up the courage to ask Henna out before someone goes and blows up the high school. Again.

Because sometimes there are problems bigger than this week's end of the world, and sometimes you just have to find the extraordinary in your ordinary life.

Even if your best friend is worshipped by mountain lions.

“Fresh, funny, and full of heart: not to be missed.” — Kirkus Reviews (starred review)

“Ness’ deadpan sci-fi novel pokes fun at far-fetched futuristic fantasies while emphasizing the important victories of merely living. This memorable, moving, and often hilarious read is sure to be a hit.” — Booklist (starred review)

“Fans of madcap humor and satire and those seeking more thought-provoking alternatives to the usual fare will appreciate this unique and clever take on a familiar trope.” — School Library Journal (starred review)

“Clever and laugh-out-loud funny, the supernatural side notes add tension and humor to the story. This is highly recommended for libraries serving young adults.” — Voice of Youth Advocates (VOYA) (starred review)

“The result is a cleverly metafictive, occasionally humorous, occasionally poignant love letter to the kids most likely to get sorted into Hufflepuff or who might occasionally date one of the Scooby gang, but whose real heroism lies in living their daily lives bravely and compassionately.” — Bulletin of the Center for Children’s Books (starred review)

“This clever sendup of traditional fantasy fare doesn’t have nearly the body count as Ness’s award-winning Chaos Walking trilogy, but it does have all of the heart, and then some.” — Shelf Awareness

“In this often-hilarious (and just as often poignant) parody of fantasy stories from Harry’s to Buffy’s, not everyone is a Chosen One, but “everyone’s got something”; everybody matters.” — Horn Book Magazine

The Rest of Us Just Live Here is the antidote to all things formulaic: it’s meta, playful, wise and true--and clever-as-hell. — emily m. danforth, author of The Miseducation of Cameron Post

Magical, mysterious and breathtakingly suspenseful, The Rest of Us Just Live Here is an absolute marvel of imagination, invention, and heart. I truly couldn’t put it down -- proof, once again, that Ness never disappoints. — Michael Cart, author of My Father’s Scar

“Hilarious! And so, so clever. All the characters are beautifully drawn. This is one smart, warm book, both entertaining and thought-provoking.” — Monica Edinger