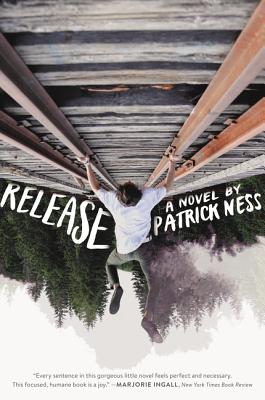 Inspired by Judy Blume’s Forever and Virginia Woolf’s Mrs. Dalloway, this novel that Andrew Smith calls “beautiful, enchanting, [and] exquisitely written” is a new classic about teenage relationships, self-acceptance—and what happens when the walls we build start coming down. A Kirkus Best Book of 2017!

Adam Thorn doesn’t know it yet, but today will change his life.

Between his religious family, a deeply unpleasant ultimatum from his boss, and his own unrequited love for his sort-of ex, Enzo, it seems as though Adam’s life is falling apart.  At least he has two people to keep him sane: his new boyfriend (he does love Linus, doesn’t he?) and his best friend, Angela.

But all day long, old memories and new heartaches come crashing together, throwing Adam’s life into chaos. The bindings of his world are coming untied one by one; yet in spite of everything he has to let go, he may also find freedom in the release.

From the New York Times bestselling author of A Monster Calls comes a raw, darkly funny, and deeply affecting story about the courage it takes to live your truth.

“Every sentence in this gorgeous little novel feels perfect and necessary. This focused, humane book is a joy.” — The New York Times Book Review

★ “Part character study, part reckoning, this is a painful, magical gem of a novel that, even when it perplexes, will rip the hearts right out of its readers.” — Booklist (starred review)

★ “Ness manages to pack all this drama into a coherent and compulsively readable story line peopled with credible, rounded characters among the teens and the adults.” — School Library Journal (starred review)

“This book’s self-awareness lends its events a dreamlike feel. Though it functions as an accessible, standalone coming-of-age story, awareness of its influences makes for a layered reading experience.” — The Horn Book

“Release is beautiful, enchanting, exquisitely written; the novel builds to an adrenaline-surged ending that only Patrick Ness can deliver. This is an incredible work of intertwined, mirrored stories that left me slack-jawed and in awe of one of the true master storytellers of our time.” — Andrew Smith, Michael L. Printz Honor–winning author of Grasshopper Jungle and Winger

“Hilarious, gripping, and viciously insightful throughout. The novel’s main points are continuously, beautifully conveyed: family consists of people chosen as much as those related by blood; and while all meaningful and positive relationships are difficult and messy, their maintenance is essential for fulfillment.” — Voice of Youth Advocates (VOYA)

“This compelling coming-of-age story will resonate with readers of all ages, and will remind everyone that the sun always rises again tomorrow.” — Brightly

“I was gripped by Adam’s journey to self-belief, told pacily, beautifully.” — London Times