The God Peak: A Novel (The God Wave Trilogy) (Hardcover) 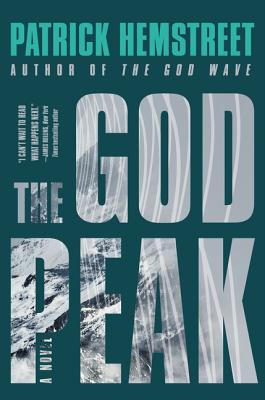 By Patrick Hemstreet
$26.99
Email or call for price.

The thrilling speculative techno-science epic begun in Patrick Hemstreet's The God Wave continues in this explosive adventure in which a team of neuroscientists must face the consequences of playing God when the superhumans they’ve created threaten to annihilate humanity.

Chuck Brenton had a simple idea: if brain waves can make the needles on an EEG machine move, why couldn’t they be trained to move other things? He and mathematician Matt Streegman developed an astonishing program that enabled a group of highly select individuals—test subjects they called the Alphas—to use their brains to manipulate both physical and digital objects. Their goal was to increase man’s potential and make the world safer.

But when their secret program was discovered, the military stepped in to take control—and unwittingly began a battle that could spell the end of humankind. A trio of renegade Alphas have used their enhanced powers to take the world hostage. Though they say they want world peace, the rebels seem willing to sacrifice countless innocent lives to achieve their goals.

Horrified by what he has unleashed, Chuck is determined to stop the monsters he’s created, no matter the risks. Coming out of hiding, he and his team must wield their own burgeoning abilities to defeat the increasingly unstable superhuman terrorists.

Patrick Hemstreet is a neuroengineer, entrepreneur, patent-pending inventor, special-warfare-trained Navy medic, stand-up comic, actor, and the author of The God Wave. He lives in Houston, Texas, with his wife, Abby, and sons, Gideon and Ezra.

“This fast-paced, thought-provoking technothriller maintains a level of plausibility even as the author bumps up the supernatural power levels considerably.”
— Publishers Weekly

“Hemstreet expands on the ideas originated in his Crichton-esque debut The God Wave, asking a simple question: if you unlocked you innate superpowers, how would you use them?”
— B&N Sci-Fi & Fantasy Blog

“The science is largely left behind in this sequel, while the action is ramped up considerably. . . . The best part of the book, though, is the moral conundrum at its core: [asking] several questions about totalitarianism and the price of peace.”
— RT Book Reviews

“The real strength of The God Peak lies in its imagination, solid plotting, and vision. On top of that, it’s got strong characters, a lot of neuroscience, and semi-autonomous ninja robots. What else could you really want?”
— Outer Places

“Hemstreet does a great job of making this feel like it could all be happening just down the street from the reader. Timely references make the story seem frighteningly relevant and cause the reader to think deeply about the current state of the world while still enveloping them in fantasy.”
— GeekMom on The God Peak

“While his first book, “The God Wave,” carries every bit of that first novel feel, its sequel takes a few more risks and gives its plot a little more polish that makes it an easy one to cruise through.”
— Pittsburgh Post-Gazette