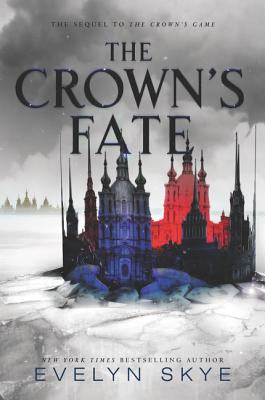 By Evelyn Skye
$9.99
Not available to order

The gorgeous and darkly compelling sequel to The Crown’s Game—perfect for fans of Red Queen and Shadow and Bone. A New York Times bestseller!

Magic is growing, shadows are rising, and the throne is at stake…

Russia is on the brink of great change. Pasha’s coronation approaches, and Vika is now the Imperial Enchanter, but the role she once coveted may be more difficult—and dangerous—than she ever expected.

Pasha is grappling with his own problems—his legitimacy is in doubt, the girl he loves loathes him, and he believes his best friend is dead. When a challenger to the throne emerges—and with the magic in Russia growing rapidly—Pasha must do whatever it takes to keep his position and protect his kingdom.

For Nikolai, the ending of the Crown’s Game stung deeply. Although he just managed to escape death, Nikolai remains alone, a shadow hidden in a not-quite-real world of his own creation. But when he’s given a second chance at life—tied to a dark price—Nikolai must decide just how far he’s willing to go to return to the world.

With revolution on the rise, dangerous new magic rearing up, and a tsardom up for the taking, Vika, Nikolai, and Pasha must fight—or face the destruction of not only their world but also themselves.

“A memorable alternate history and a page-turner full of surprises.”
— Voice of Youth Advocates (VOYA)

“Fans of The Crown’s Game will be delighted”
— Booklist

Praise for THE CROWN’S GAME: “Readers will eagerly await the next installment.”
— School Library Journal

Praise for THE CROWN’S GAME: “The Crown’s Game is a captivating tale that deftly transports readers to a mysterious and fascinating fantasy world, one teeming with hidden magic and fiery romance.”
— Sabaa Tahir, #1 New York Times bestselling author of An Ember in the Ashes

Praise for THE CROWN’S GAME: “Utterly enchanting. The true wizardry is in the atmosphere-Skye crafts a Russia of magic and elegance, depicting St. Petersburg in such a breath-taking way that you’ll swear you’re standing on the banks of the Neva and dancing through the halls of the Winter Palace.”
— Sara Raasch, author of the Snow Like Ashes trilogy

Praise for THE CROWN’S GAME: “Gorgeous and richly imagined, The Crown’s Game is a dazzling exploration of the choices we make when faced with impossible situations and our darker selves. Readers will fall unabashedly in love with this novel.”
— Sara Grochowski, Brilliant Books

Praise for THE CROWN’S GAME: “It was beautiful. It was terrible. I loved it.”
— Hafsah Faizal, Icey Books

Praise for THE CROWN’S GAME: “The Night Circus meets Cinderella in an alternate Russia. This extraordinary world has everything from insanely creative acts of magic, political intrigue, hope against all odds, romance, and oh-such-high-stakes-non-stop action. It is hands-down honest-to-goodness brilliant. Bravo.”
— Angela Mann, Keplers Books