Baby, You're Gonna Be Mine: Stories (Paperback) 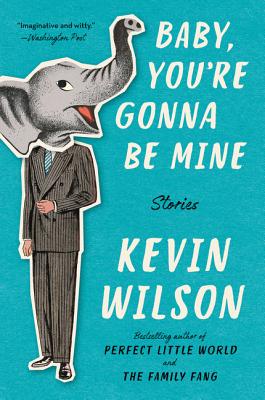 “Hands down my favorite book of the year.” -- Ann Patchett, New York Times bestselling author of The Dutch House and Commonwealth

From the New York Times bestselling author of The Family Fang comes his first short story collection in nearly a decade, combining his signature quirkiness with his keen eye for emotional complexity to explore the fraught relationship between parents and children.

“Wildfire Johnny” is the story of a man who discovers a magic razor that allows him to travel back in time. “Scroll Through the Weapons” is about a couple taking care of their underfed and almost feral nieces and nephews. “Signal to the Faithful” follows a boy as he takes a tense road trip with his priest. And “Baby, You’re Gonna Be Mine,” the title story, is about a narcissistic rock star who moves back home during a rough patch. These stories all build on each other in strange and remarkable ways, showcasing Wilson’s crackling wit and big heart.

Filled with imagination and humor, Baby, You’re Gonna Be Mine is an exuberant collection of captivating and charmingly bizarre stories that promise to burrow their way into your heart and soul.

"Wildfire Johnny" will be the first project in development with “The Great” actor Nicholas Hoult and MRC Television.

Kevin Wilson is the New York Times bestselling author of the novels Nothing to See Here, which was a Read with Jenna book club selection; The Family Fang, which was adapted into an acclaimed film starring Nicole Kidman and Jason Bateman; and Perfect Little World; as well as the story collections Tunneling to the Center of the Earth, winner of the Shirley Jackson Award; and Baby, You’re Gonna Be Mine. His fiction has appeared in Ploughshares, Southern Review, One Story, A Public Space, and Best American Short Stories. He lives in Sewanee, Tennessee, with his wife and two sons.

“Hands down my favorite book of the year.” — Ann Patchett

“There’s a lot of Salinger in Wilson’s writing — the wit, the vulnerability and the cosmic sadness. And, these new stories of Wilson’s are something else; they’re funny, raw and beautiful and, for sure, they killed me.” — Maureen Corrigan, Fresh Air

“The versatile Wilson inspires tears and laughter, and crafts memorable phrases that may unexpectedly pop up in the reader’s mind weeks later.” — Atlanta Journal-Constitution

“A welcome event, seeing as how Wilson is a master of the form. . . . Within each story, Wilson shows his sharp wit and expansive empathy for the weirdest corners of the human condition.” — Nylon Magazine

“Saying it’s as good as Tunneling to the Center of the Earth doesn’t do it justice. . . . Wilson never moralizes, much less sensationalizes, any predicament he sketches; rather he makes us feel and wonder at the slings and arrows of outrageous fortune.” — Booklist (starred review)

“Darkly funny. . . . [The stories] stick with the reader and show a terrible world made less so, sometimes, by human contact, even though humans were usually the problem in the first place.” — Publishers Weekly

“A novel you keep reading for old-fashioned reasons—because it’s a good story and you need to know what happens. But you also keep reading because you want to know what a good family is.  Everyone wants to know that.” — John Irving, The New York Times Book Review

“[A] rich tapestry of relationships that bind in unexpected ways. . . . Wilson’s deliciously breezy style reels you in and holds you tight.” — Denver Post

“Quirky. . . . Wilson’s Perfect Little World finds its bliss in the vast disconnect between people’s best intentions and where they land.” — Entertainment Weekly