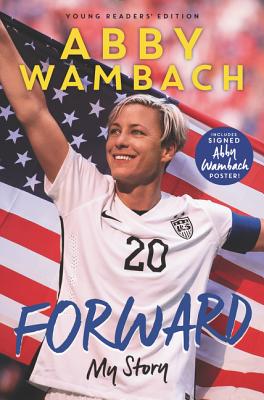 Abby Wambach has always pushed the limits of what is possible. Named by Time magazine as one of the most influential people of 2015, the iconic soccer player captured the nation’s heart when she led her team to its recent World Cup Championship. Admired for her fearlessness and passion, Abby is a vocal advocate for women’s rights and equal opportunity, pushing to translate the success of her team to the real world. She has become a heavily requested speaker to a wide a range of audiences, from college students to executives at Fortune 500 companies.

In this edition of Forward that’s been adapted for young readers, Abby recounts her own decisions, wins, losses, and the pivotal moments that helped her become the world class athlete and leader she is today. Wambach’s book goes beyond the soccer field to reveal a soulful person grappling with universal questions about how we can live our best lives and become our truest selves. Written with honesty and heart, Forward is an inspiring blueprint for individual growth and a rousing call to action.

Abby Wambach is an American soccer player, coach, two-time Olympic gold medalist, FIFA Women’s World Cup Champion, and the 2012 FIFA World Player of the Year. A six-time winner of the U.S. Soccer Athlete of the Year award, Wambach has been a regular on the U.S. women’s national soccer team since 2003, earning her first cap in 2001. She is the highest all-time scorer for the national team and holds the world record for international goals for both female and male soccer players, with 184 goals.

Karen Abbott is the New York Times bestselling author of Sin in the Second City, American Rose, and, most recently, Liar Temptress Soldier Spy, named one of the best books of 2014 by Library Journal, the Christian Science Monitor, Amazon, and Flavorwire, and optioned by Sony for a miniseries. A native of Philadelphia, she now lives in New York City, where she's at work on her next book.