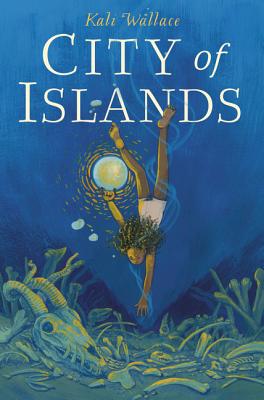 A dark and riveting middle grade fantasy from the critically acclaimed Kali Wallace about an archipelago of magical islands and one girl’s dangerous discovery on the ocean floor. Perfect for fans of Holly Black and Kate Milford.

In a foggy archipelago called the City of Islands, twelve-year-old Mara has always been fascinated by the magic that drifts on the air as songs. But as a servant for the powerful Lady of the Tides, Mara must earn her keep by searching for magical treasures deep in the murky ocean.

Then Mara finds the skeletons of strange hybrid creatures that haven’t existed in the city for centuries—all humming with a powerful spell-song. Convinced her discovery will earn her the opportunity to study magic, Mara shares them with the Lady. But instead of a reward, the Lady gives Mara a new challenge: to sneak into the island fortress, the Winter Blade.

Now Mara must dive deeper than ever before to survive her mission. The chilling truths that Mara uncovers along the way, about her past as well as about the secrets of her beloved city, are more dangerous—and magical—than she ever imagined.

Kali Wallace is the author of two novels for teens and many short stories. She studied geology for years but now devotes her time to writing. She lives in Southern California. You can find her at www.kaliwallace.com.

“Wallace builds intrigue, layer by layer, page by page, until readers are glued to each word right up to the magnificent end.” — Kirkus Reviews (starred review)

“Wallace creates an intriguing world. The racial and ethnic diversity within this seagoing nation, as well as its powerful female leaders and acceptance of same-gender marriages, make for a welcome reboot of the standard sword-and-sorcery setting. An adventurous story that will appeal to middle school fantasy readers.” — School Library Journal

“City of Islands is a richly imagined, thoroughly engrossing adventure featuring terrible secrets hiding in murky depths, power-hungry mages battling over ancient magic, and, best of all, one brave girl with the vision and heart to set things right. I loved this book.” — Anne Ursu, author of Breadcrumbs and The Real Boy

“City of Islands churns with mystery and adventure, friendship and betrayal. I fell right under its singing-spell, and didn’t want to leave.” — Sally Pla, author of The Someday Birds

“A thrilling, magical adventure, full of surprises.” — Claire Fayers, author of The Voyage to Magical North