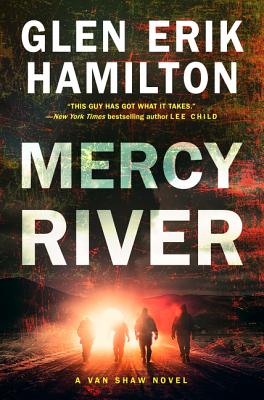 By Glen Erik Hamilton
$26.99
Not available to order.

This is book number 4 in the Van Shaw Novels series.

Helping a fellow veteran accused of murder, Van Shaw is drawn into a dangerous labyrinth involving smuggled opioids, ruthless mercenaries, and deadly family secrets that will challenge his notions of brotherhood and justice in this riveting thriller from Anthony, Macavity and Strand Critics Award-winning author Glen Erik Hamilton.

When his friend Leo Pak is arrested on suspicion of murder and armed robbery, Van Shaw journeys to a remote Oregon county to help his fellow Ranger. Van had been Leo’s sergeant when they served with the 75th Regiment in Afghanistan, and back in the States, Leo had helped Van when he needed it most.

Arriving in the isolated town of Mercy River, Van learns that his troubled friend had planned to join a raucous three-day party that dominates the place for one weekend each year. Attended by hundreds of former and active Rangers, the event is more than just a reunion; it’s the central celebration of a growing support network called the Rally, founded and led by a highly decorated Special Operations general named Macomber.

But there’s more going on in Mercy River than just a bunch of Army hard cases blowing off steam. The murder victim—the owner of a local gun shop where Leo worked part time—was dealing in stolen heroin-grade opiates. Worse, the town has a dark history with a community of white supremacists, growing in strength and threatening to turn Mercy River into their private enclave.

The cops have damning evidence linking Leo to the murder, and Van knows that backwaters like Mercy River are notorious for protecting their own. His quest to clear Leo’s name will stir up old grudges and dark secrets beneath the surface of this secretive small town, pit his criminal instincts against his loyalties to his brothers in arms, and force him to question his own belief in putting justice above the letter of the law.

Glen Erik Hamilton creates crime fiction that pulsates with emotional intensity and is “as much fun to read as Lee Child’s Jack Reacher” (J. A. Jance). In Mercy River, Hamilton highlights the unique and powerful moral struggle inherent in Van Shaw’s iconoclastic character—an honorable man torn between upholding the law and breaking it to save innocent lives. Action-packed, riveting, and powerful, Mercy River is a novel that goes to the heart and soul of what it means to be a hero in a corrupt and punishing world.

A native of Seattle, GLEN ERIK HAMILTON was raised aboard a sailboat and grew up around the marinas and commercial docks and islands of the Pacific Northwest. His novels have won the Anthony, Macavity, and Strand Critics awards, and have been nominated for the Edgar, Barry, and Nero awards. After living for many years in Southern California, he and his family have recently returned to the Emerald City and its beautiful overcast skies.