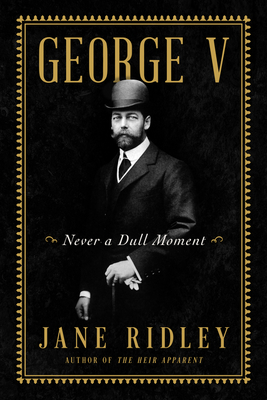 From one of the most beloved and distinguished historians of the British monarchy, here is a lively, intimately detailed biography of a long-overlooked king who reimagined the Crown in the aftermath of World War I and whose marriage to the regal Queen Mary was an epic partnership

The grandfather of Queen Elizabeth II, King George V reigned over the British Empire from 1910 to 1936, a period of unprecedented international turbulence. Yet no one could deny that as a young man, George seemed uninspired. As his biographer Harold Nicolson famously put it, "he did nothing at all but kill animals and stick in stamps.” The contrast between him and his flamboyant, hedonistic, playboy father Edward VII could hardly have been greater.

However, though it lasted only a quarter-century, George’s reign was immensely consequential. He faced a constitutional crisis, the First World War, the fall of thirteen European monarchies and the rise of Bolshevism. The suffragette Emily Davison threw herself under his horse at the Derby, he refused asylum to his cousin the Tsar Nicholas II during the Russian Revolution, and he facilitated the first Labour government. And, as Jane Ridley shows, the modern British monarchy would not exist without George; he reinvented the institution, allowing it to survive and thrive when its very existence seemed doomed. The status of the British monarchy today, she argues, is due in large part to him.

How this supposedly limited man managed to steer the crown through so many perils and adapt an essentially Victorian institution to the twentieth century is a great story in itself. But this book is also a riveting portrait of a royal marriage and family life. Queen Mary played a pivotal role in the reign as well as being an important figure in her own right. Under the couple's stewardship, the crown emerged stronger than ever. George V founded the modern monarchy, and yet his disastrous quarrel with his eldest son, the Duke of Windsor, culminated in the existential crisis of the Abdication only months after his death.

Jane Ridley has had unprecedented access to the archives, and for the first time is able to reassess in full the many myths associated with this crucial and dramatic time. She brings us a royal family and world not long vanished, and not so far from our own.

Jane Ridley is a professor of history at the University of Buckingham, where she teaches an MA course on biography. Her books include The Young Disraeli, 1804–1846, acclaimed by Robert Blake as definitive; The Architect and His Wife, a highly praised study of the architect Edwin Lutyens and his relationship with his troubled wife, which won the Duff Cooper Prize; and Victoria, written for the Penguin Monarchs series. Her most recent full biography, The Heir Apparent: A Life of Edward VII, the Playboy Prince (published in the UK as Bertie: A Life of Edward VII), was a Sunday Times bestseller and one of the most critically acclaimed books of 2013. A fellow of the Royal Society of Literature, Ridley writes book reviews for the Spectator and other newspapers, and has also been featured on radio and appeared on several television documentaries. She lives in London and Scotland.

"Superb . . . a perfectly candid portrait of our present Queen's grandfather: demythologised, certainly, and with spades called spades, but not trivialised, and not denied full credit for the massive amount he achieved . . . Ridley's convincing thesis [is] that George V was the true begetter of modern constitutional monarchy . . . this book makes it clear we were lucky to have him." — Simon Heffer, Daily Telegraph

"A 21st-century [biography] was overdue . . . and nobody could do it better than the immensely experienced Jane Ridley . . . The Windsors have always been emotionally handicapped, and in this respect George V was their prize exhibit." — Max Hastings, Sunday Times

“Succeeds, against all the odds, in being superbly un-dull. . . . Ridley has a wonderful ability to push the story along, luring us with salient details, even making one ‘fairy-tale of stamp-collecting’ riveting. Her account of the King’s death, secretly brought on late on the evening of January 20, 1936, by his doctor, Dawson, with a large dose of morphia and cocaine, so that it would appear in the next morning’s Times rather than the evening paper, is chilling. Never a dull paragraph.” — Air Mail

"A magnificent new life -- wonderfully funny, from its winning subtitle onwards, and full of human sympathy and understanding . . . an evocative and touching portrait of a surprisingly impressive man." — Philip Hensher, Spectator

"The best royal biography since James Pope-Hennessy's Queen Mary (1959) . . . rivetingly interesting . . . sheds an entirely new light on both George V and his consort . . . Jane Ridley persuades us that their tactful handling of the many crises of the reign paved the way for the stable constitutional monarchy that persists to this day." — A. N. Wilson, Times Literary Supplement

"Most biographers would shy away from the notoriously dull George V. Not so Ridley, whose biography of the stamp-collecting, bird-shooting king is top-notch." — Robbie Millen, The Times, *Books of the Year*

"Jane Ridley's George V is so sparklingly incisive about both the king and Queen Mary that it almost counts as a double biography. The pheasant-shooting, stamp-collecting, moderating monarch and his bejewelled, shopaholic consort are beautifully portrayed in all their complexities." — Ysenda Maxtone Graham, Spectator, *Books of the Year*