Among The Shadows: A Detective Byron Mystery (A John Byron Novel #1) (Paperback) 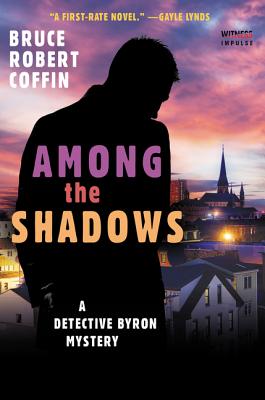 This is book number 1 in the A John Byron Novel series.

Fall in Portland, Maine usually arrives as a welcome respite from summer’s sweltering temperatures and, with the tourists gone, a return to normal life—usually. But when a retired cop is murdered, things heat up quickly, setting the city on edge.

Detective Sergeant John Byron, a second-generation cop, is tasked with investigating the case—at the very moment his life is unraveling. On the outs with his department’s upper echelon, separated from his wife, and feeling the strong pull of the bottle, Byron remains all business as he tries to solve the murder of one of their own. And when another ex-Portland PD officer dies under suspicious circumstances, he quickly realizes there’s much more to these cases than meets the eye. The closer Byron gets to the truth, the greater the danger for him and his fellow detectives.

This taut, atmospheric thriller will appeal to fans of Michael Connelly and John Sandford.

Bruce Robert Coffin is a retired police detective sergeant and bestselling author of the Detective Byron Mysteries. He lives and writes in Maine.

“You won’t be able to stop reading Among the Shadows.”
— Bangor Daily News

“Compulsively readable, Among the Shadows is that rare cop novel that’s chock full of blood-and-guts detail while taking you on a ride of a lifetime. Detective John Byron is a great character, and the reader will be eager for the next installment of his story.”
— Gayle Lynds, New York Times bestselling author of The Assassins

“A powerful story about how the past haunts the present. ... [Coffin] knows his subject intimately and firsthand.”
— Down East Magazine

“Bruce Robert Coffin knows cops -- how they talk, how they act, how they think -- and he deploys that knowledge to devastating effect in Among the Shadows. A tense, twisty tale of greed, betrayal, and revenge, it heralds the arrival of a powerful new voice in crime fiction.”
— Chris Holm, author of The Killing Kind

“Among the Shadows is the best debut I’ve read in ages, filled with suspense, great writing, a perfectly realized setting in Portland, Maine, and an intriguing main character. Detective John Byron promises to become a breakout favorite among readers of crime fiction. He’s already one of mine.”
— Paul Doiron, author of Widowmaker

“Brims with great, believable dialogue [and] suspense to keep you on the edge of your chair. ... Don’t miss Among the Shadows.”
— BookLoons

“With the twists and racing pace of a thriller and the profound authenticity of a police procedural, Among the Shadows is the kind of debut crime novel that could only be written by an ex-cop.”
— Brian Thiem, author of Red Line

“Bruce Robert Coffin’s debut crime novel is a compelling page-turner that keeps you guessing - and rooting for his determined investigator - until the very end.”
— Kate Clark Flora, author of Finding Amy

“A complex, but well-structured plot with careful foreshadowing and subtle red herrings to keep the reader guessing. Coffin clearly has storytelling talent. ... [A] suspenseful, fast-paced, and entertaining mystery.”
— Kennebec Journal